After being suitably impressed with the First Strike starter boxed set for Warhammer 40,000, I decided that some of the models in the set might be a good place to experiment with painting. Aside from painting the majority of Dreadwhisper for the Curse of the Alabaster games last winter, I have not painted another model in my entire long history of being involved in the hobby, letting that all fall on Adam’s shoulders. Having no particular use for the push-fit Primaris Space Marines that I assembled from First Strike, they seemed like the ideal place to start to learn the particulars of painting. I also had an extra cast of our True-scale Space Marine, and figured his large size would also be a good way to ease into the process. After some consideration, I selected the Raptors Space Marine Chapter to paint my first models as. I always loved the drab military look of their chapter, reminding me of Sherman tanks from WWII. Conveniently, I also had most of the colors that I thought I would need from a Vallejo Model Air paint set for German/Allied WWII models.

Painting both the Primaris and the true-scale Space Marine both started with the airbrush, laying down a primer coat and then a layer of black. This was followed by a thorough coat of Vallejo’s Model Air Dark Green RLM71 (71.015), before airbrushing on a more sparing coat of Russian Green 4BO (71.017) on the more open, exposed areas. Finally, I airbrushed an even more controlled layer of 1:1 Russian Green and Tank Ochre 1943 (71.081). This created a nice, depth-filled green for the Space Marines. Athonian Camoshade was used sparingly in shaded areas, and Tank Ochre was used for highlights on the armours’ edges. To add some extra interest to the armor, I painted chipping by carefully spotting on Vallejo Model Air Armour Brown (71.041) in areas I predicted would suffer the most wear. I added a touch of Tank Ochre to the lower edge of most of the brown chips so that they look more three dimensional. Other than green, the other primary color on the Raptors is silver. It was done with two Vallejo Game Air colors, Gunmetal  (72.754) for the base and Chainmail Silver (72.753) for the highlights, after a coat of Nuln Oil.

Having finished these first two Space Marines, I am pretty pleased how they turned out. It was a good learning experience, allowing me to come to terms with an airbrush, but also try my hands at edge highlighting and freehand work on the shoulderpads. Next, I plan to finish the other Primaris marines from the First Strike boxed set, and then move on to the other models that come in the box. It is exciting to be finally painting after all of these years involved in the hobby, and something that I hope to continue for many years to come!

THE RED RAPTORS of THE ADEPTUS ASTARTES 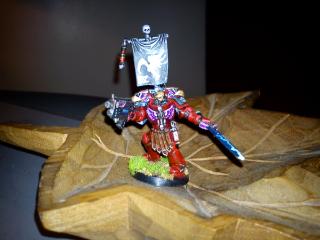 AUTHOR: Brother Nexiss. Under order of Penitence by 1st Chaplain Roxus Torr, for the offence of Blasphemous Jesting. N.B/ Wondering whether or not the God-Emperor of Mankind's Arse is numb by now after all that sitting around, is no laughing matter! 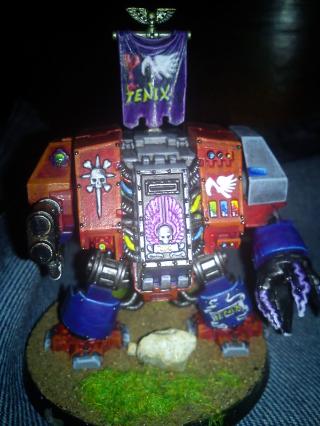 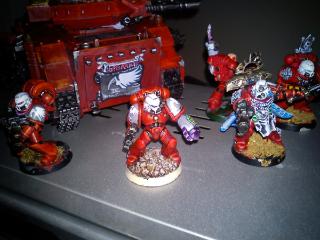 Formed during the 26th Founding as it became painfully clear to The High Lords of Terra, and especially Lord Commander Militant Hythron, an immediate increasement of Astartes Chapters following The Despoilers 12th Black Crusade( Gothic Wars) was urgently required.

Deliberately created as a stellar roving chapter and positioned out to the eastern sectors of Imperial space, as a cautionary bulwark against xenos incursions from beyond the Eastern Fringe.

The Red Raptors were a fully operational, warp capable and immensely formidable Astartes Chapterby the year 742.M41. First blood as a Chapter came during The Damocles Crusade, against The fledgling Tau Empire, where they aquitted themselves admirably in actions on the surface of Hyrax III, and also in a gigantic space/orbital battle above the dirt brown globe in the same campaign.

Here though, the Chapter was to receive it's first taste of significant loss when the then Flagship: Khan's Anvil suffered severe punishment at the hands of a trio of Tau Manta class heavy cruisers. Although Chapter Master Abraxas Sentor deftly swooped and veered in the colossal battle, utterly obliterating the Sept Clanmaster's own Flagvessel with a nova cannon strike, and crippling a second, it was the third Manta which struck the mortal blow.

As Khan's Anvil limped around to face the final foe the venerable craft was biscected by no less than 5 seperate Ion torpedoes, and finished with a withering hail of magmarail-cannon salvos to the command bridge. Khan's Anvil, Flagship of the young Chapter for only 4yrs imploded as its warp engines detonated under such a fusillade.

Revenge came quick though as the Anvil's implosion created a warp flare which destroyed the Tau vessel's equivalent of The Geller Field, and it was sucked into the realm of Chaos with the loss of all hands.

A permanant stellar beacon marks the Chapter Master's last site of battle, and his personnel standard now flies with uncounted others on the Avenue of Heroes on Holy Terra.

Got Comments? Discuss This Page in the Forums. Click Here.

Ten Thousand years ago, Warmaster Horus fell to the dark forces of Chaos, taking with him 8 other Primarchs whose legions joined him in the great Heresy which would change the fate of the galaxy forever. The forces of the Chaos Space Marines have since taken refuge in the Eye of Terror, from which they launch their campaigns of destruction upon, waging war on a vast scale in the name of the Chaos Gods.

The mysterious powers of the Eye of Terror have fused living flesh with mechanical devices - Marines of the traitor legions are a twisted hybrid of man and machine - and though they still use the same armour and weaponry as loyalist marines, their equipment is often redesigned or reconfigured, covered in the icons of their dark leaders to show their allegiance to the Dark Gods.

Raptors are the elite shock troops of the Chaos Space Marine forces - carefully choosing the weakest and most vulnerable enemy unit, before pouncing upon them. Jump Packs are rarely available to Chaos forces, and are considered to be something of a badge of honour - and, when paired with the amplified voxcasters which Raptors often use to disorientate their victims, along with an array of special weapons, Raptor squads are a terrifying prospect to face on the battlefield.

Warp Talons are marines who have seen prolonged exposure to the powers of the warp - these soulless hunters are able to stalk their prey from outside of the material world - only emerging moments before dispatching their victims with their deadly Vorpal Claws.

Since I posted my first unit of Raptors Intercessors, a few people asked for the colours and processes used. So, as requested, here is a step-by-step!

NOTE: There are some steps I’ve marked as optional. If you’re painting rank and file and want to speed things up you can skip these steps as the added effect is subtle, but I’ve included them in case you want to try them out on characters etc. 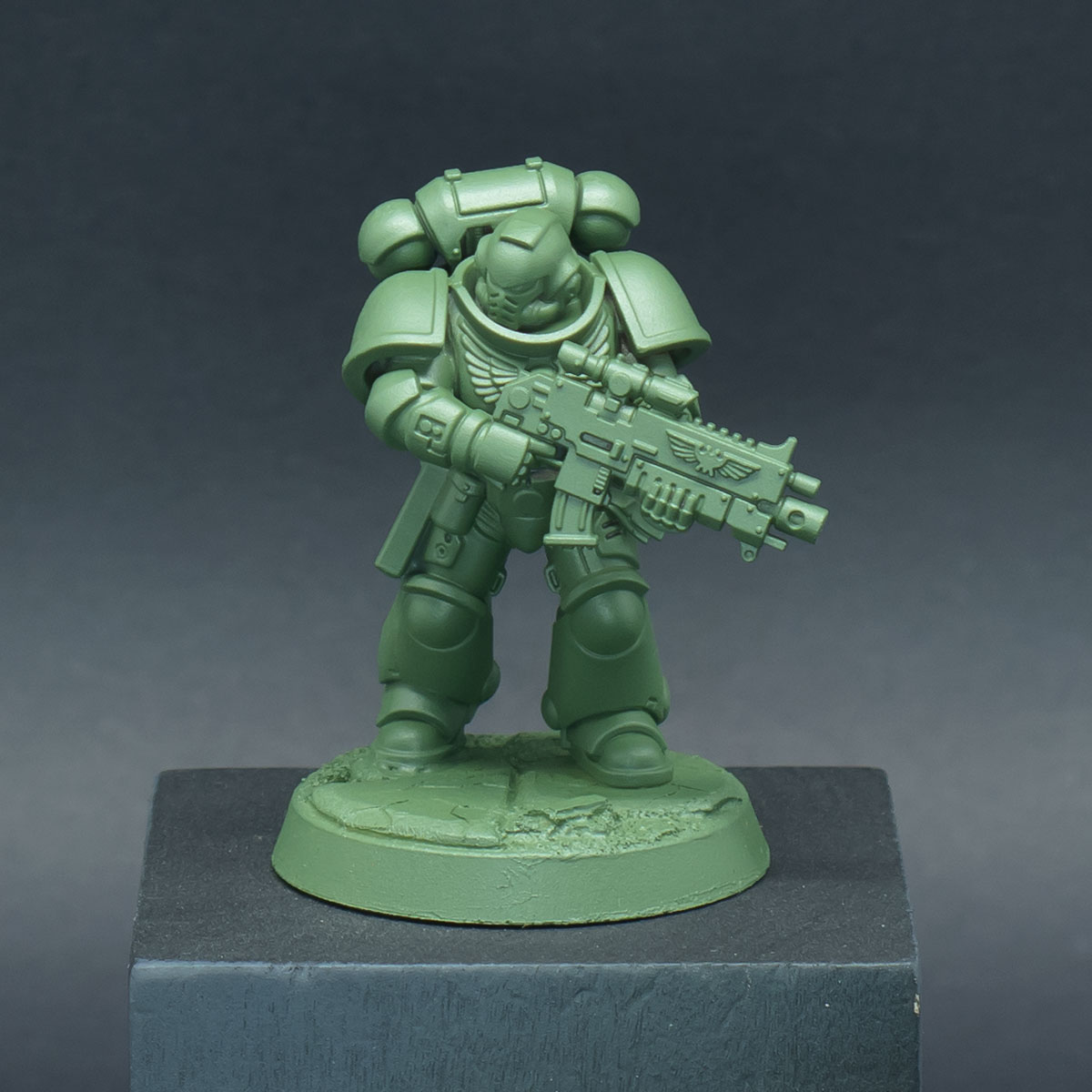 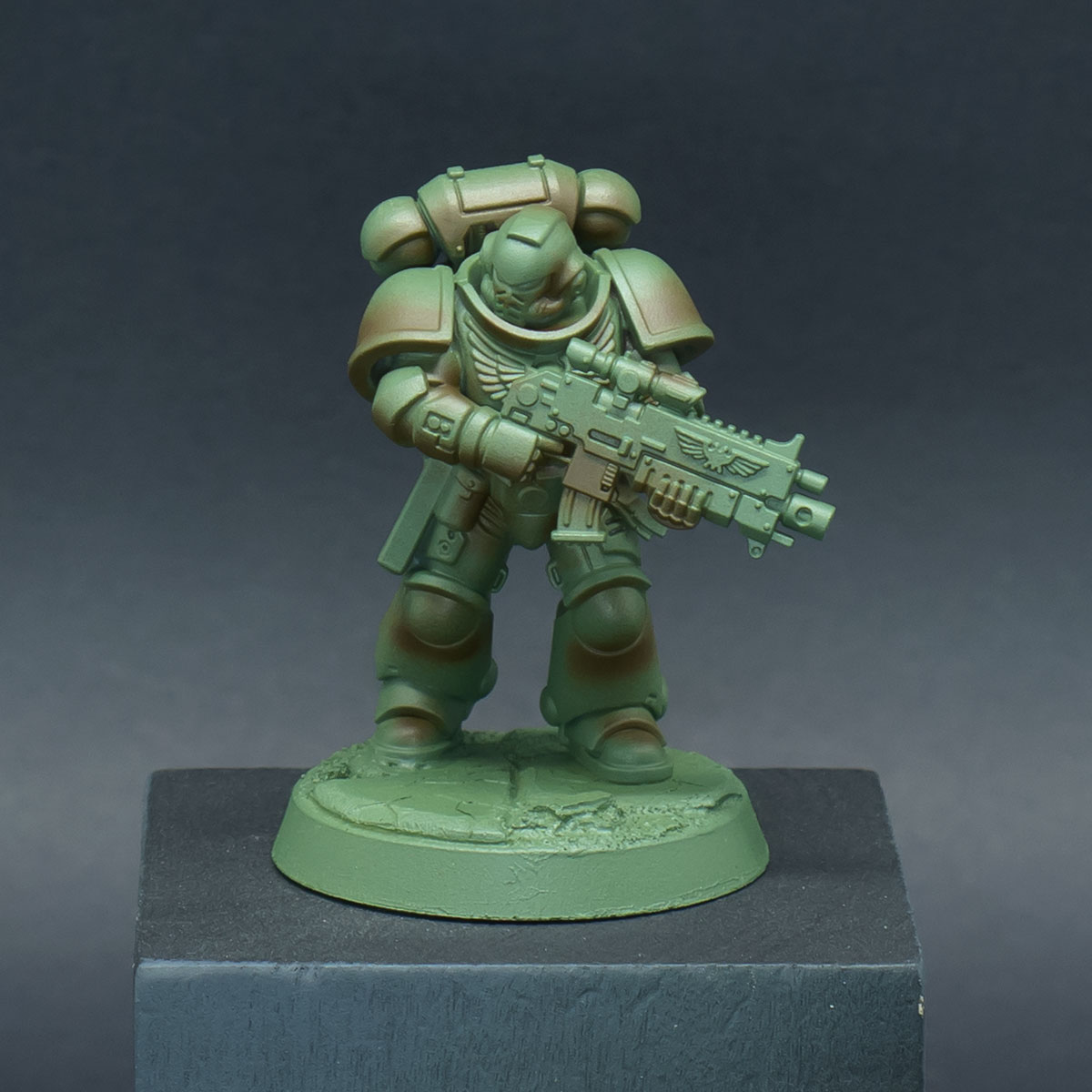 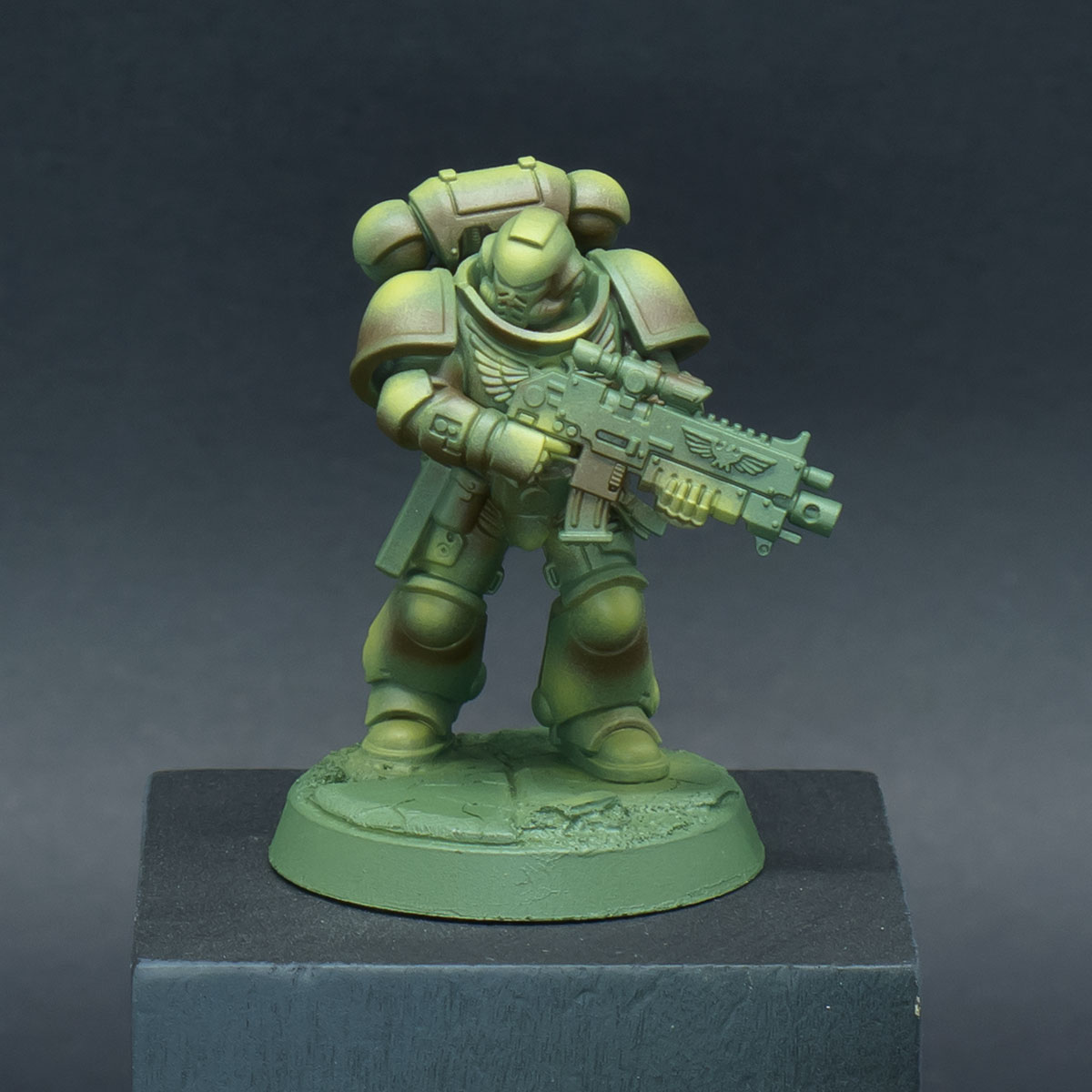 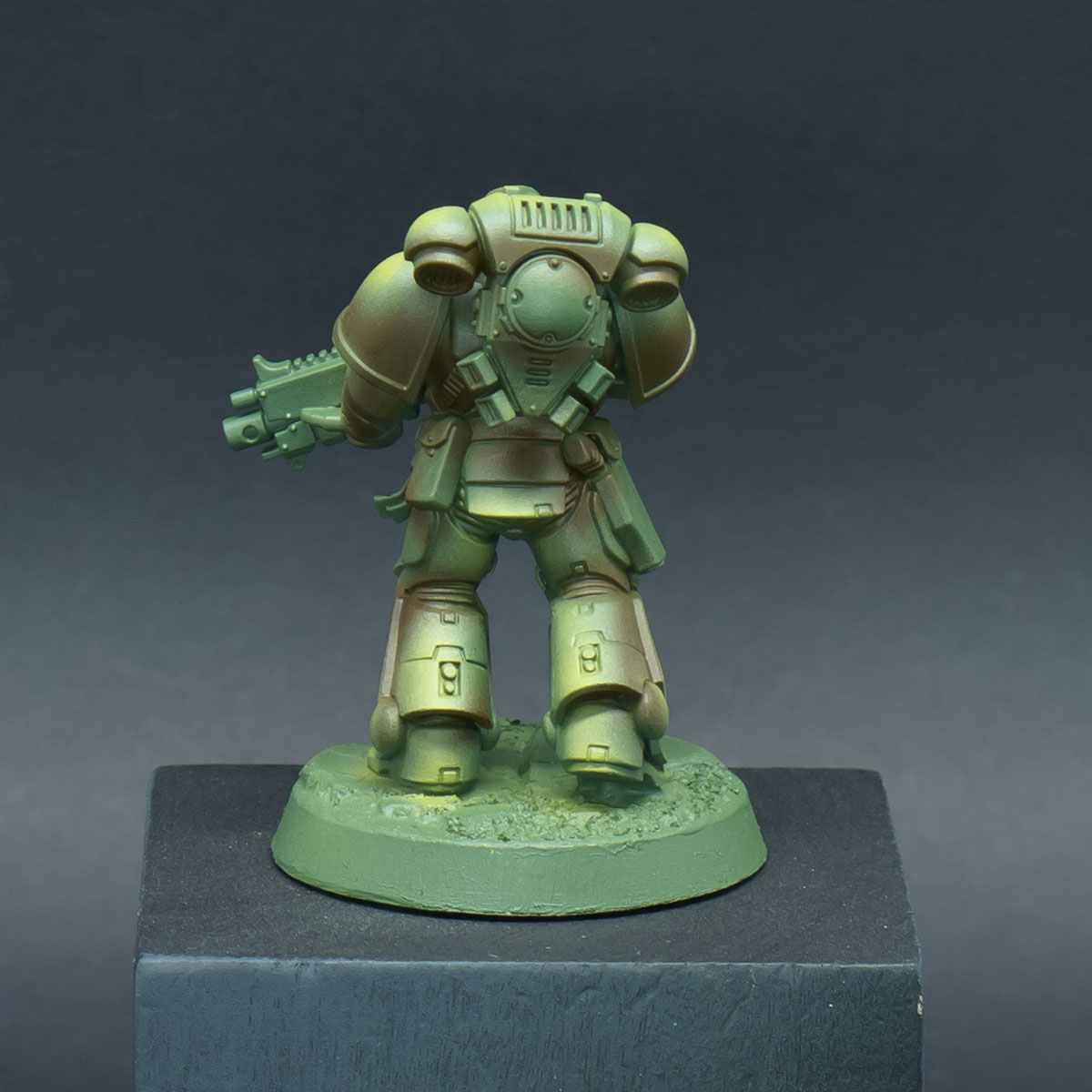 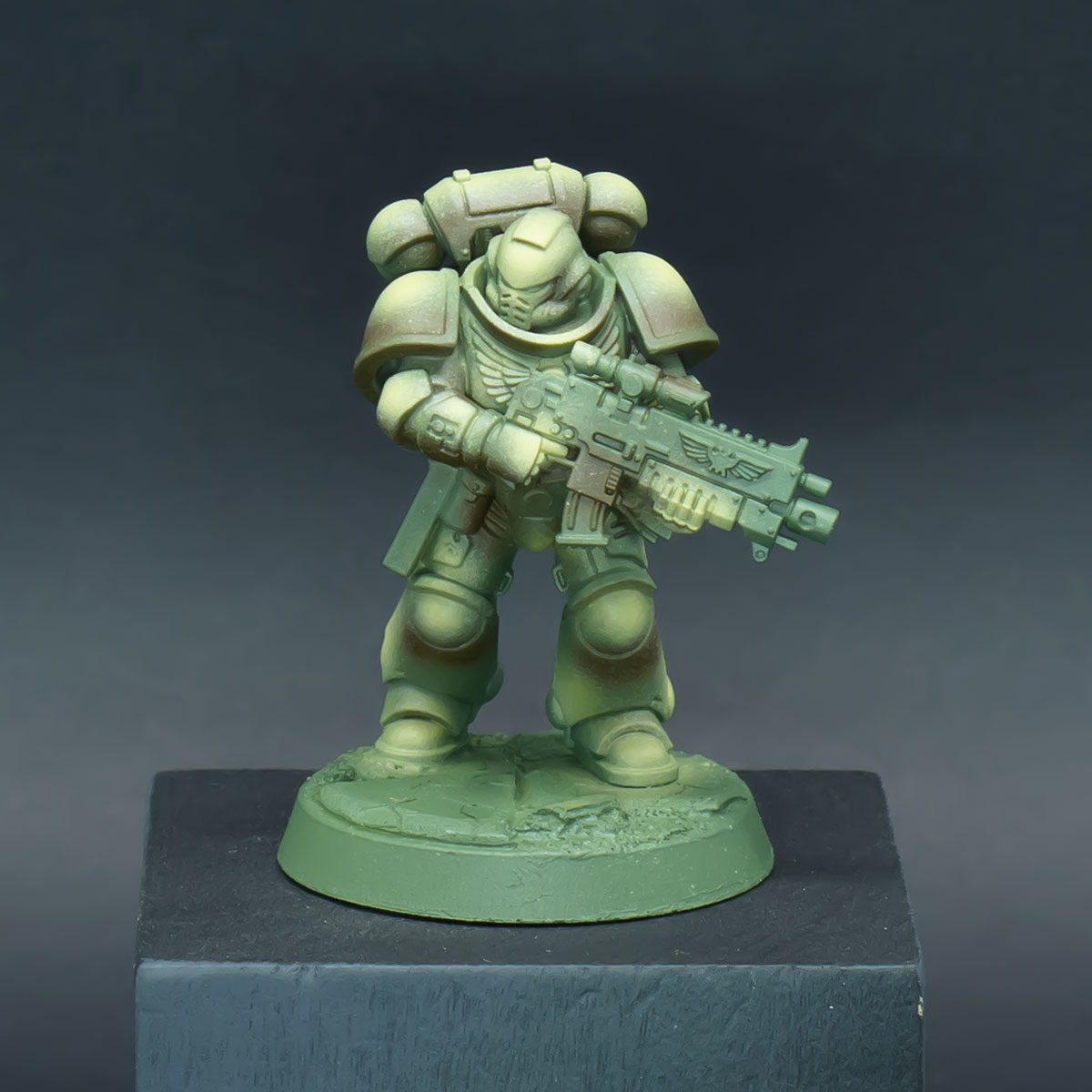 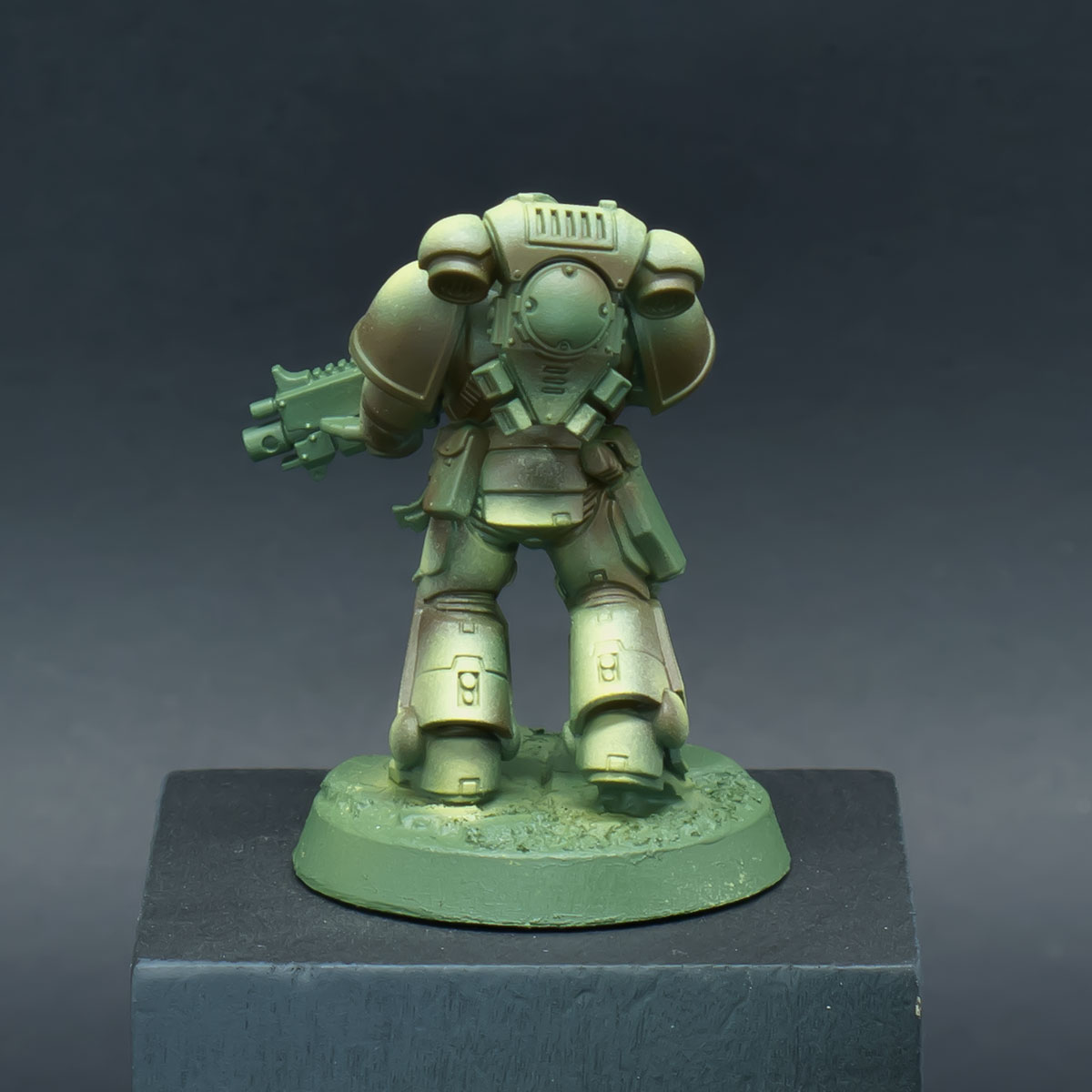 See separate tutorial on applying decals with Microset and Microsol.

Apply Citadel Athonian Camoshade mixed 3:1 with Lahmian Medium. The wash is applied with a normal brush, not airbrush, allowing it to settle in the recesses. The Lahmian Medium helps it to not stain the raised areas and flat surfaces. You can do one or two coats, depending on how thickly or thinly you apply it, until you’re happy with the shading. 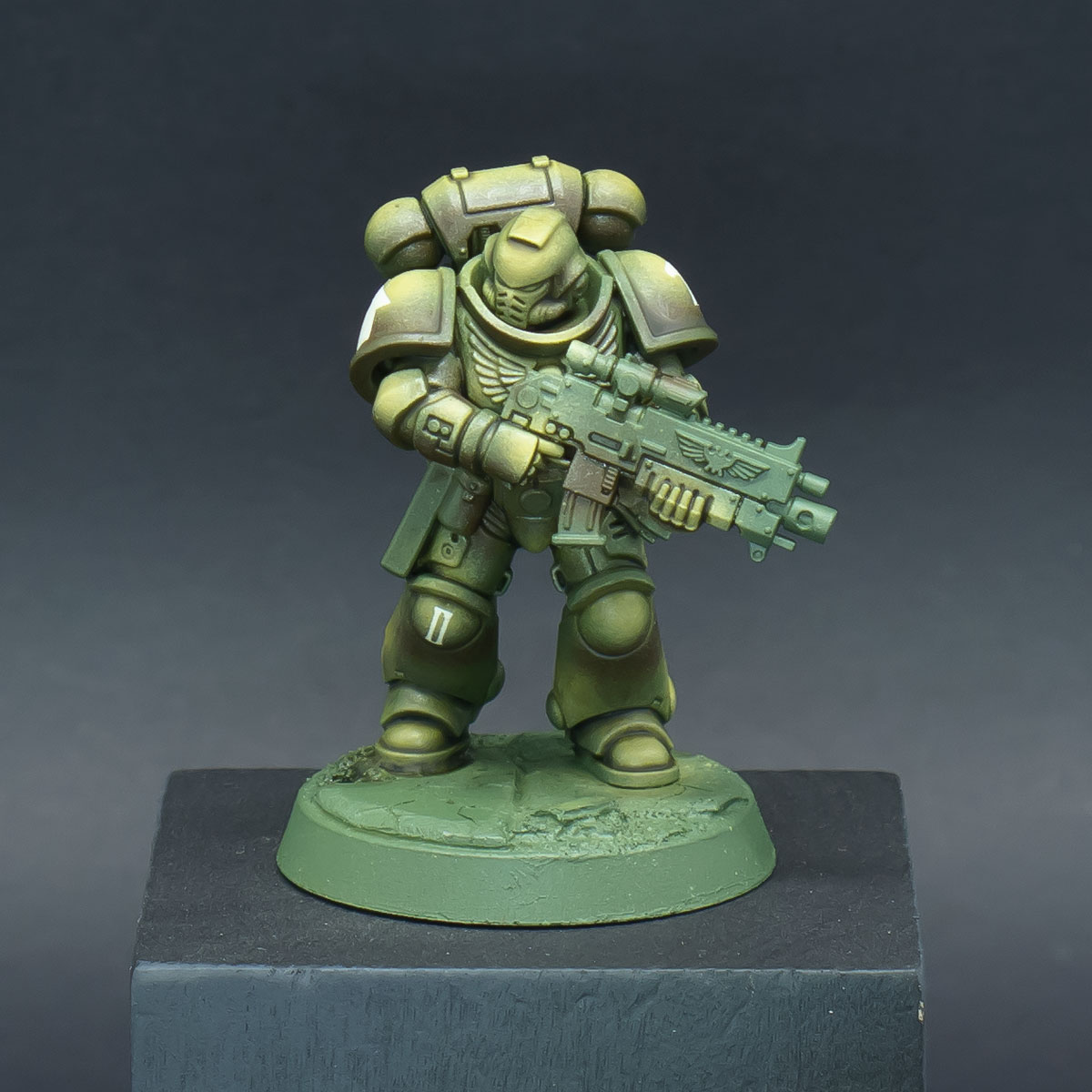 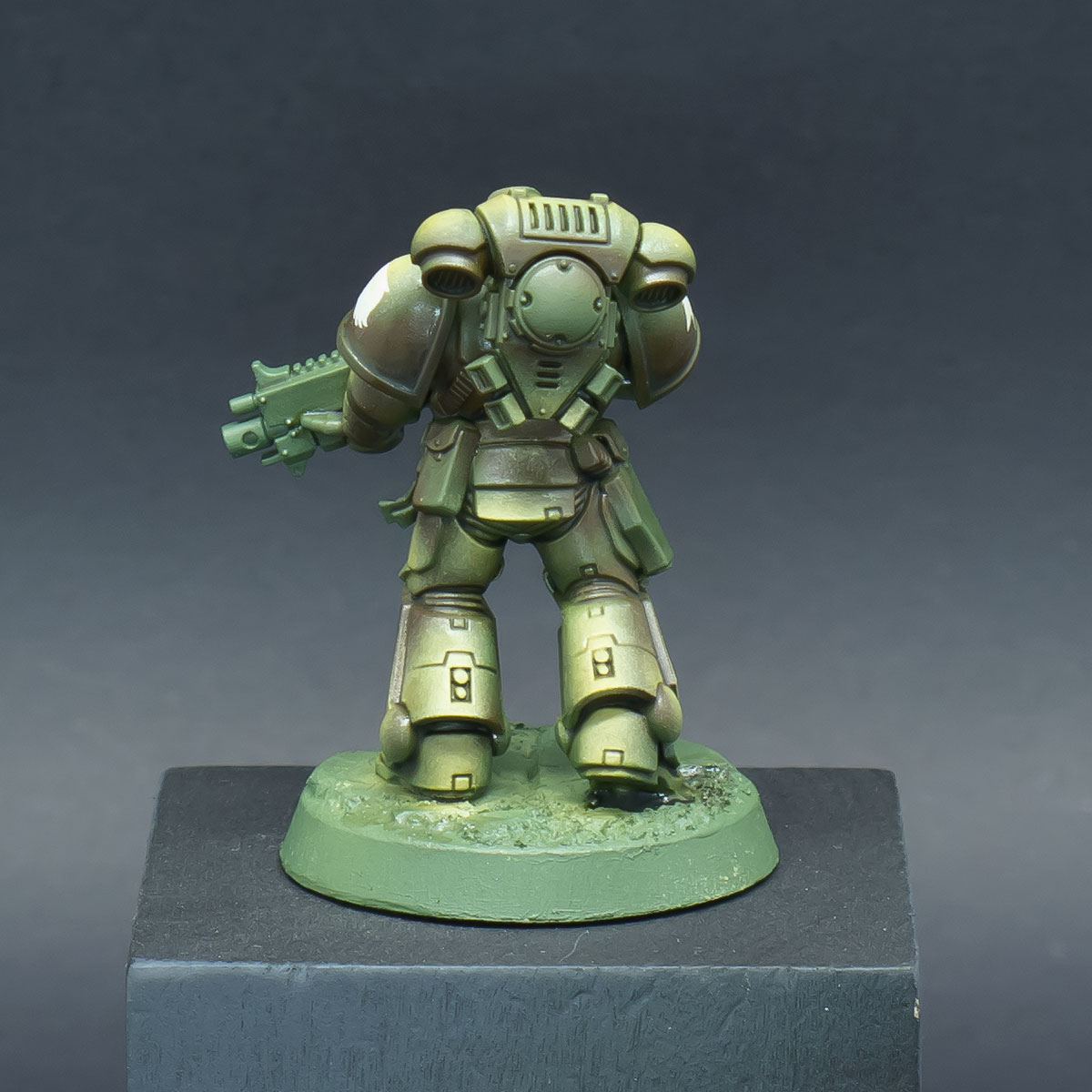 Base coat the other areas of the model: 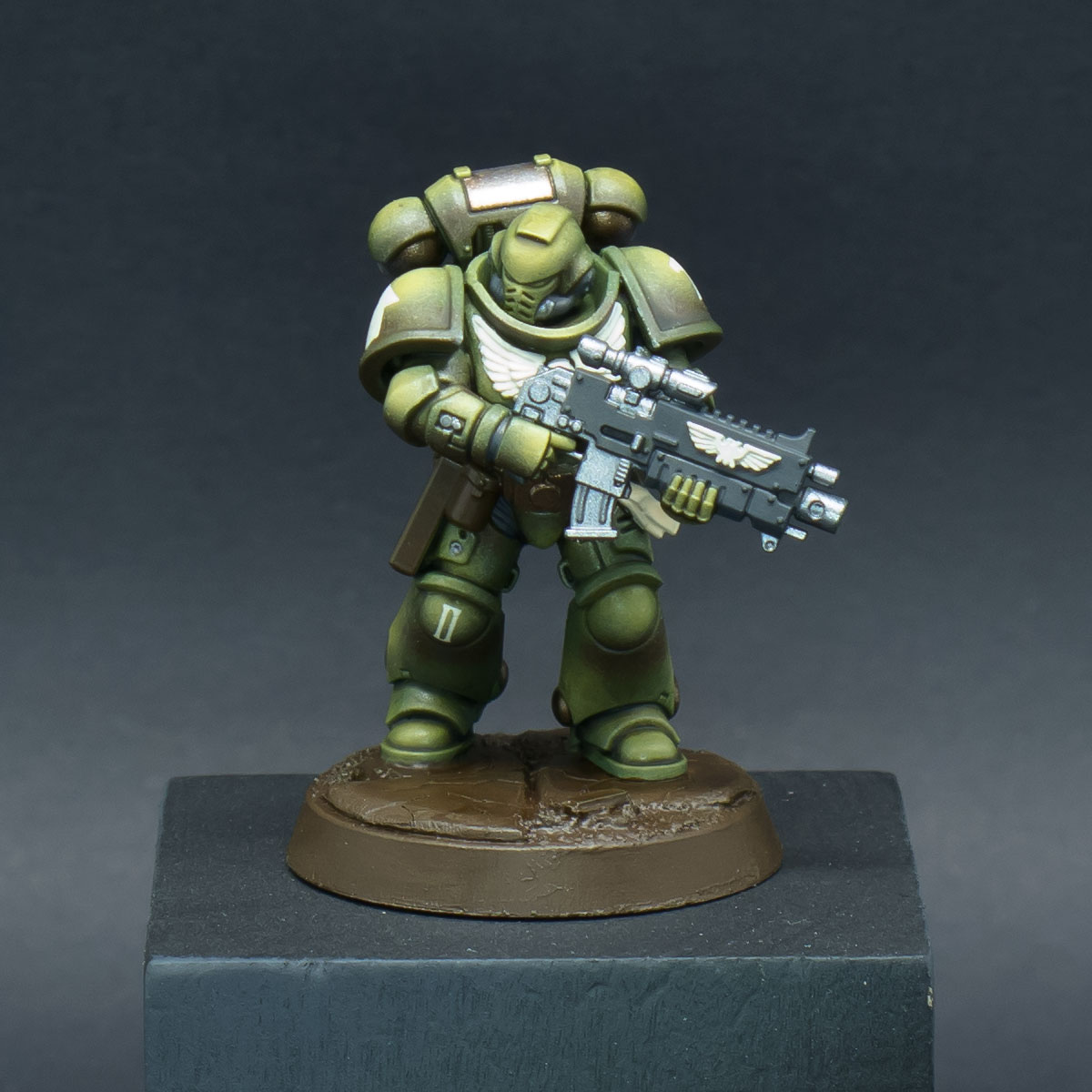 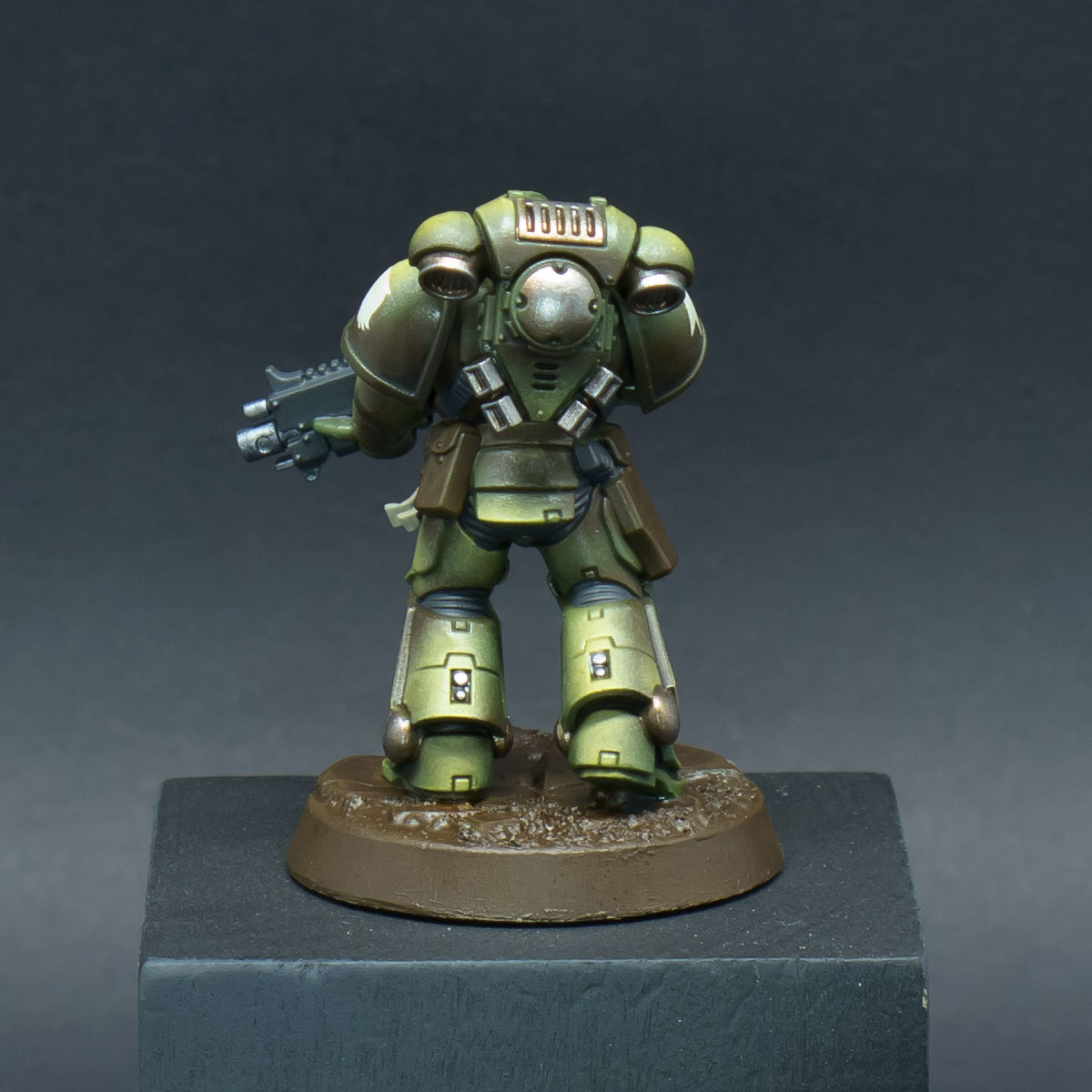 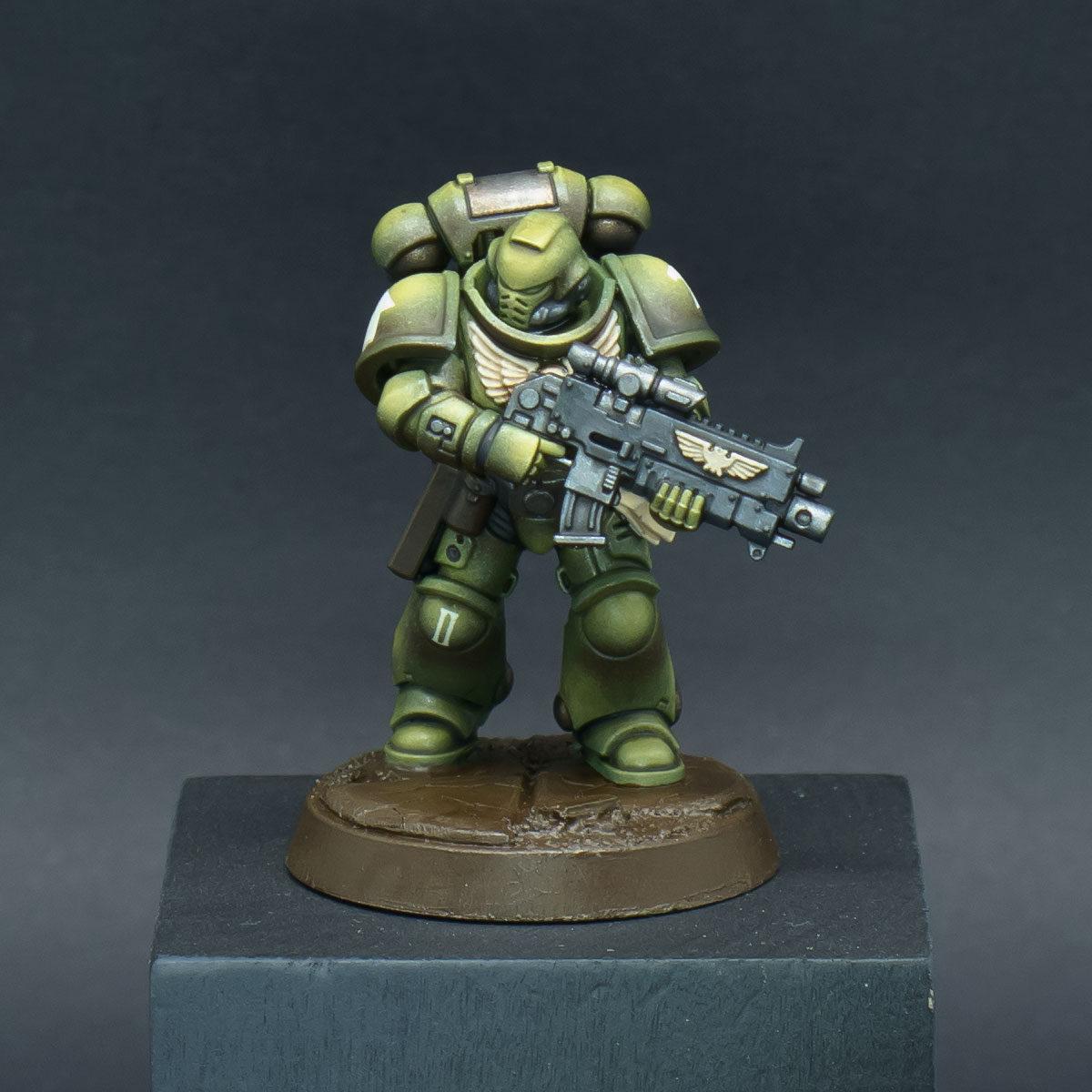 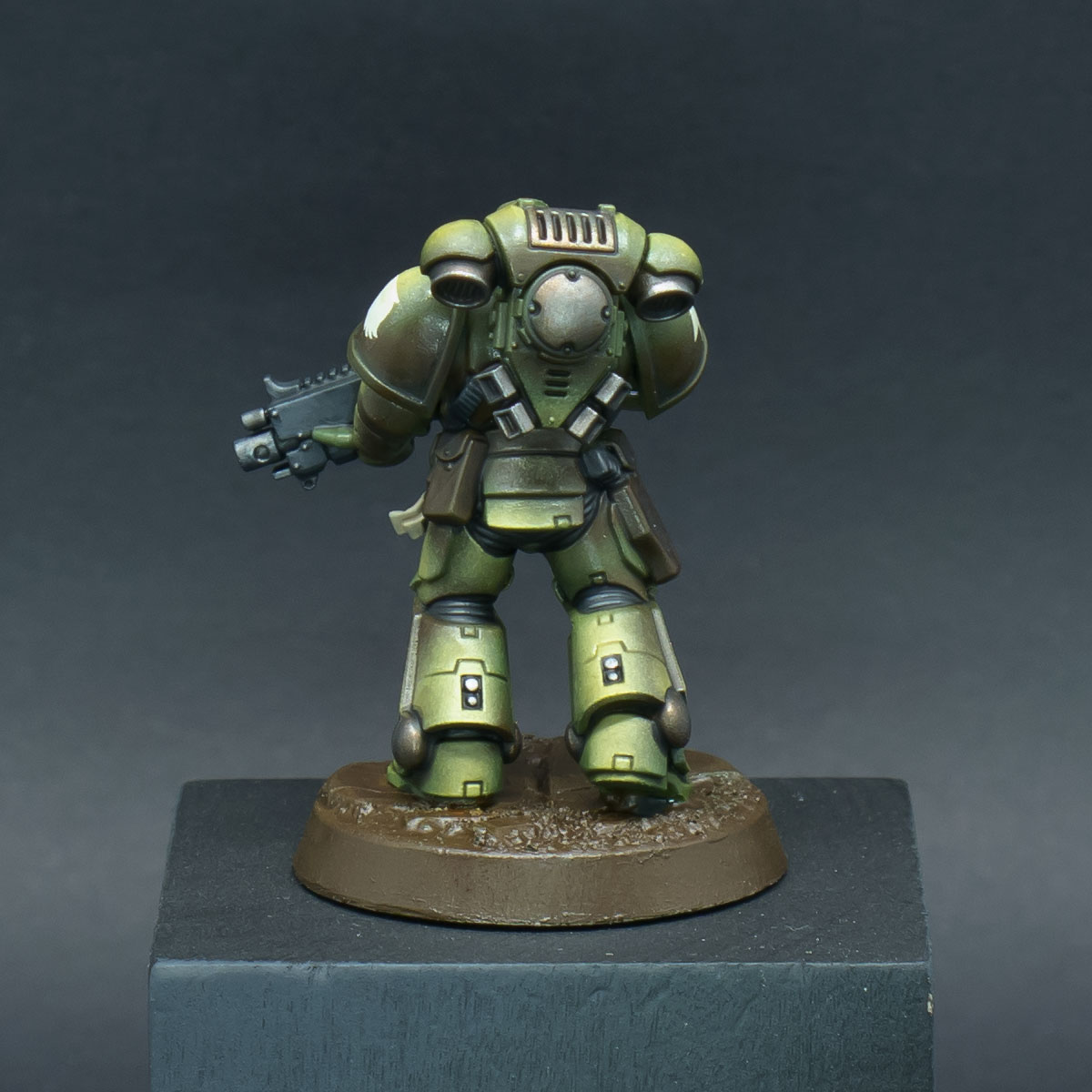 OPTIONAL: Apply edge highlights to the armour using 1:1 Citadel Ogryn Camo and Andrea Color White Paint Set No. 1. If you want to speed things up you can skip straight to Andrea Color No. 1 (or Citadel Screaming Skull) without mixing with the Ogryn Camo. 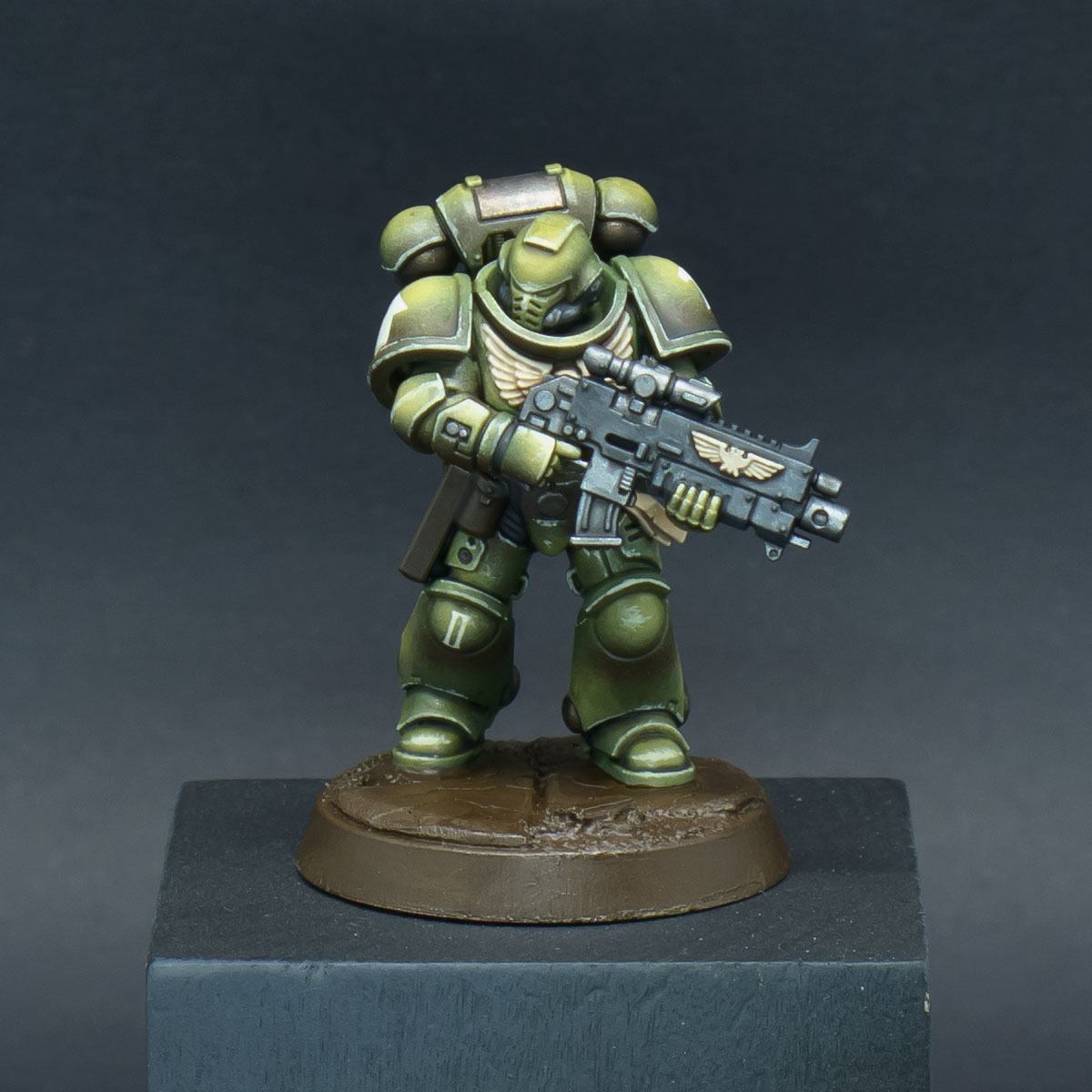 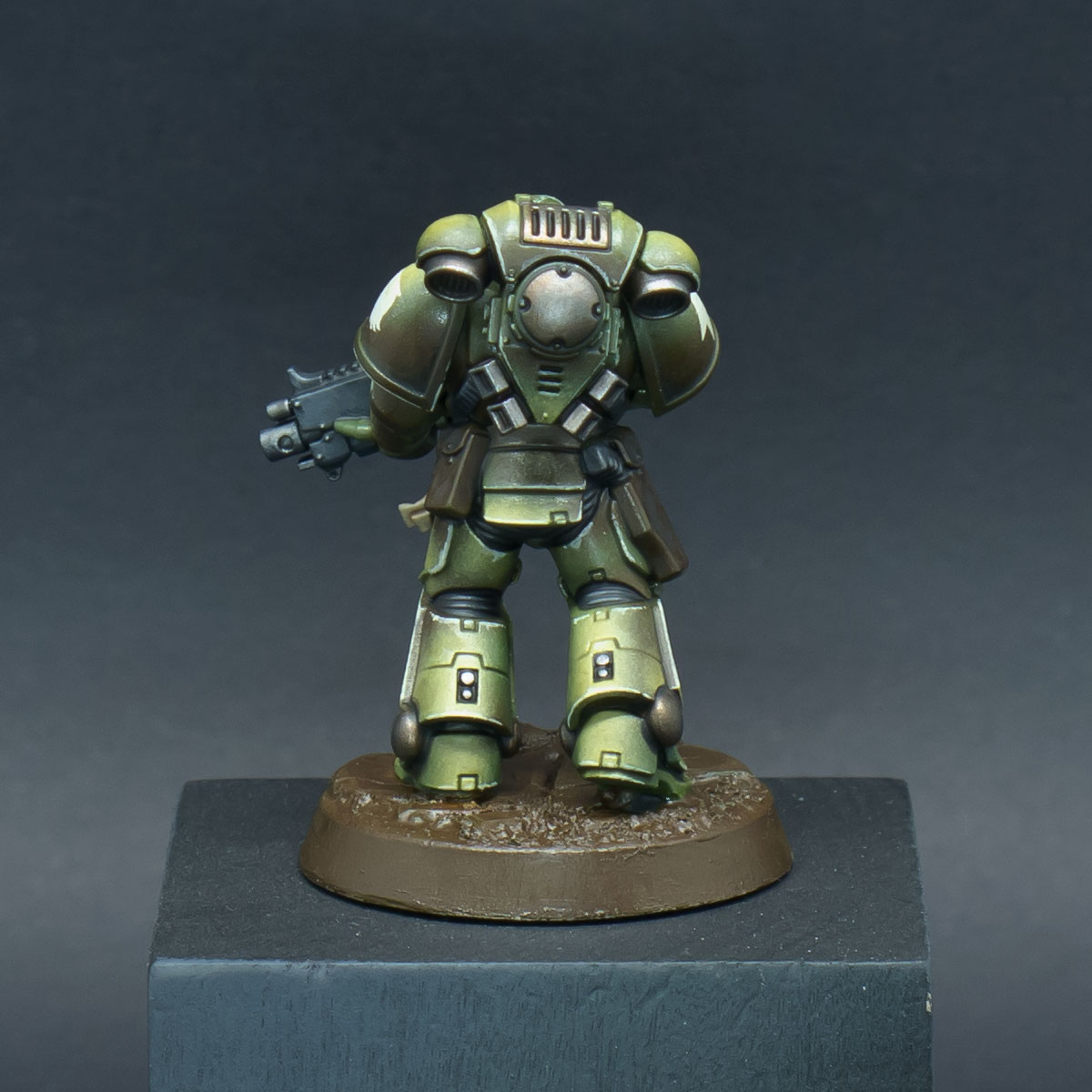 Apply edge highlights with Andrea Color White Paint Set No. 1, drawing them out into scratches here and there and adding dots where there will be chips to the armour. 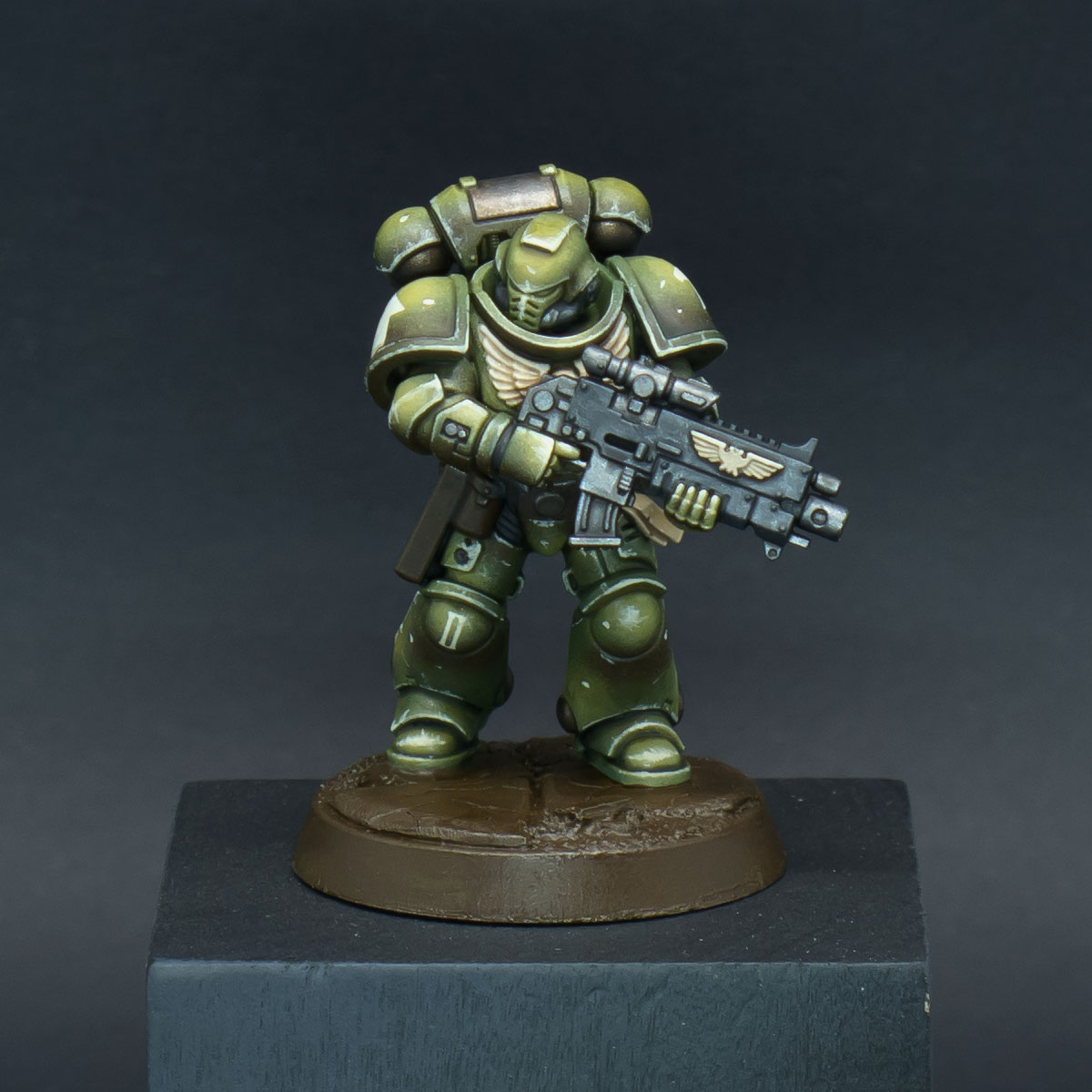 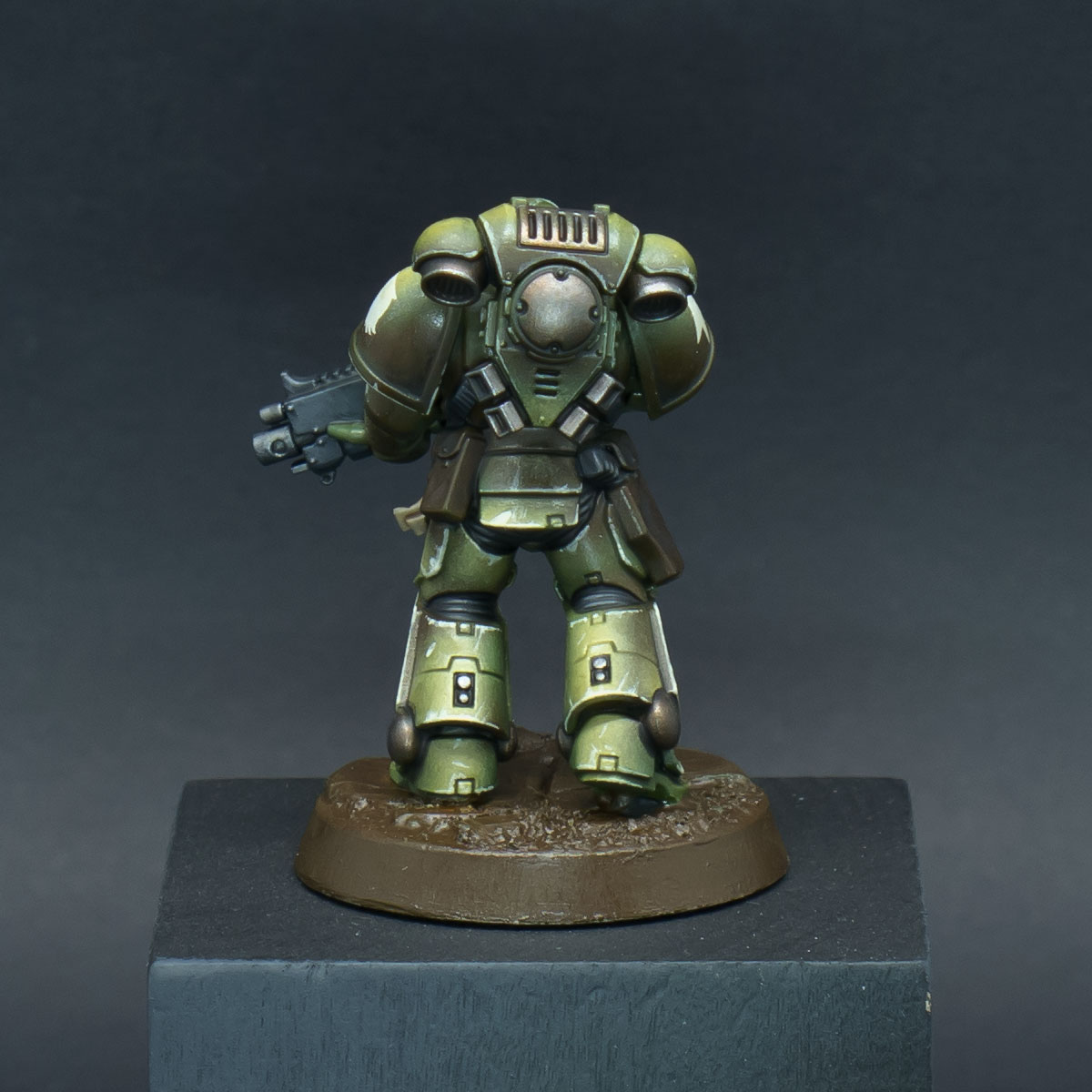 Apply Vallejo Game Color Smoky Ink (72068) over the top of the chips, leaving some of the white highlight colour visible at the bottom of the chip. 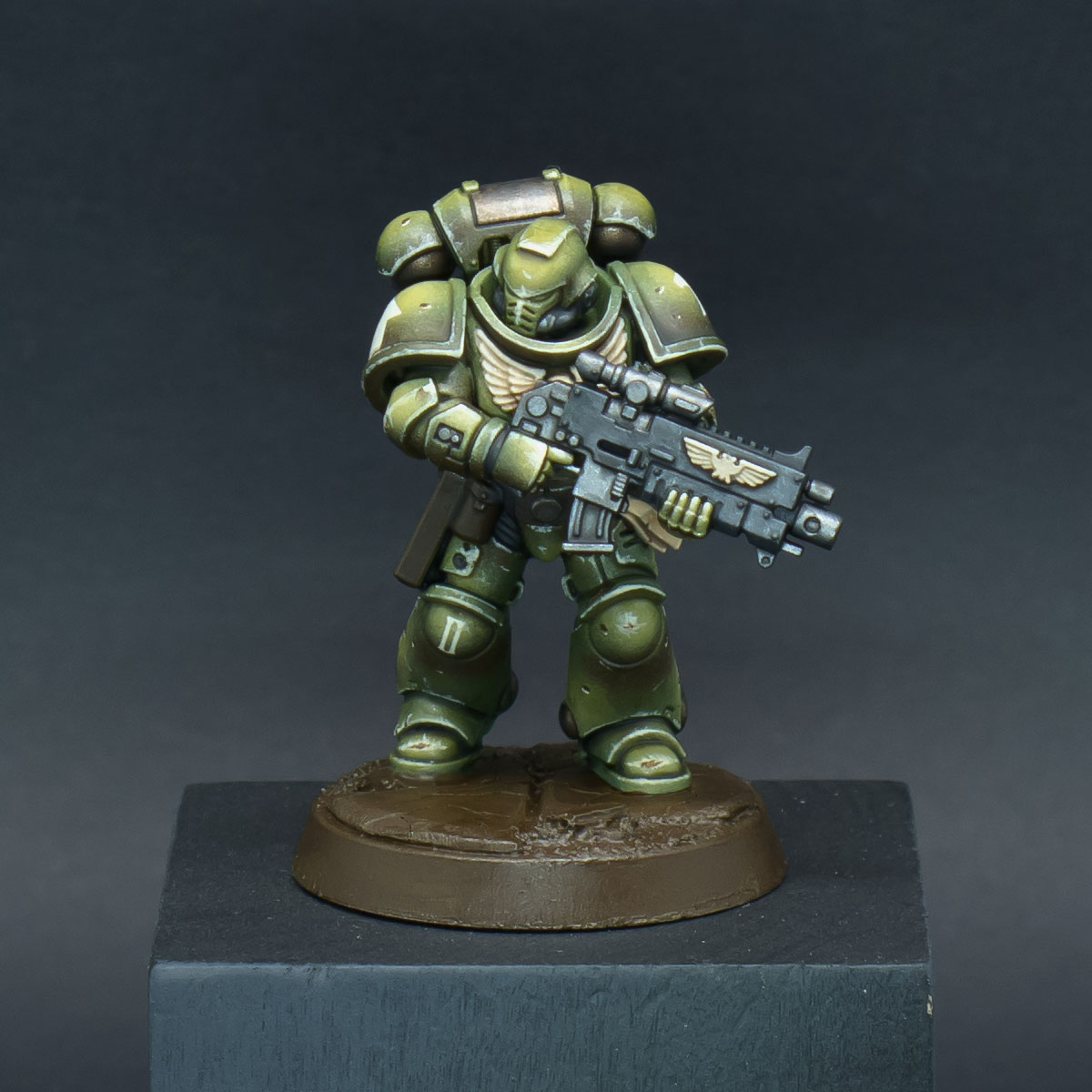 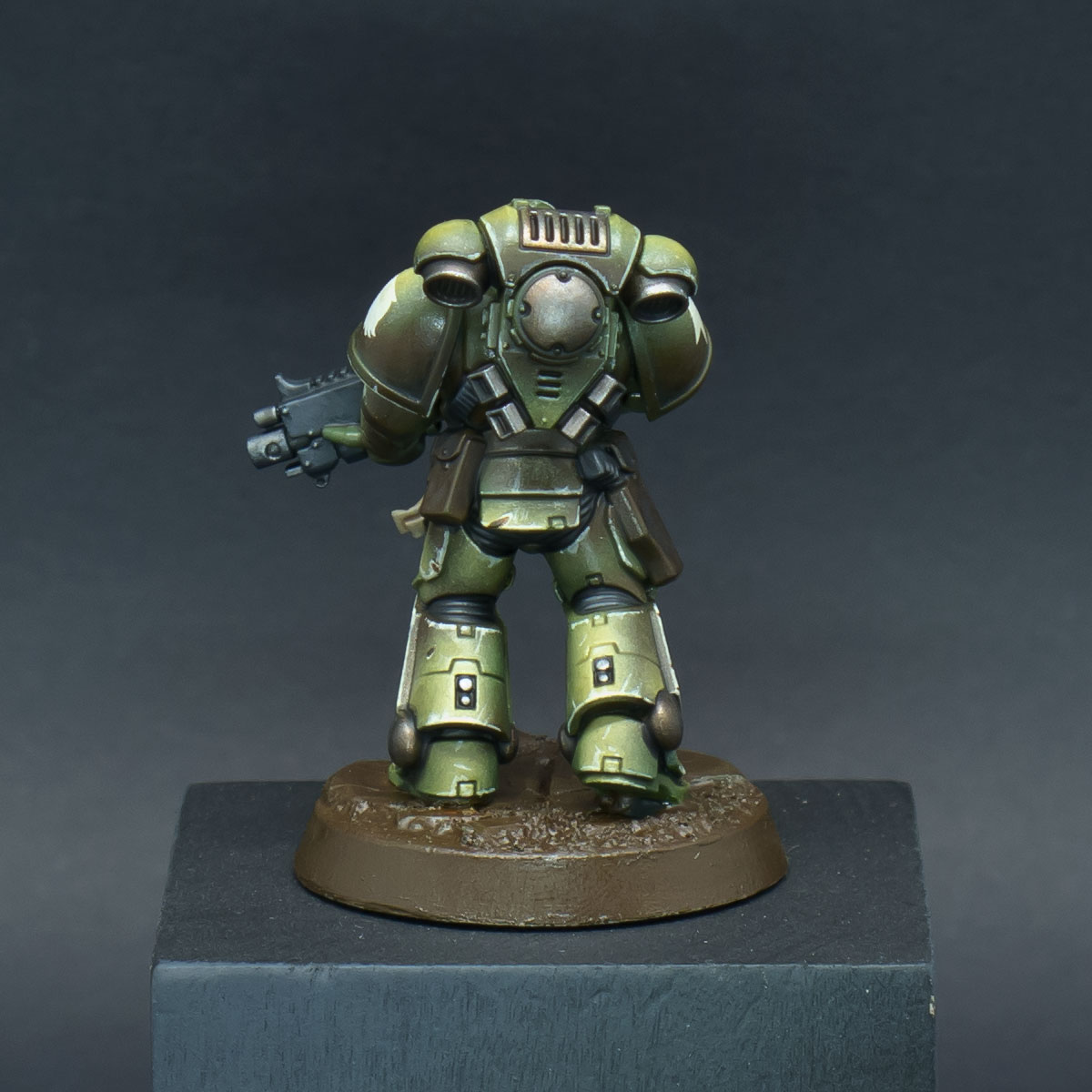 Apply highlights to the other areas: 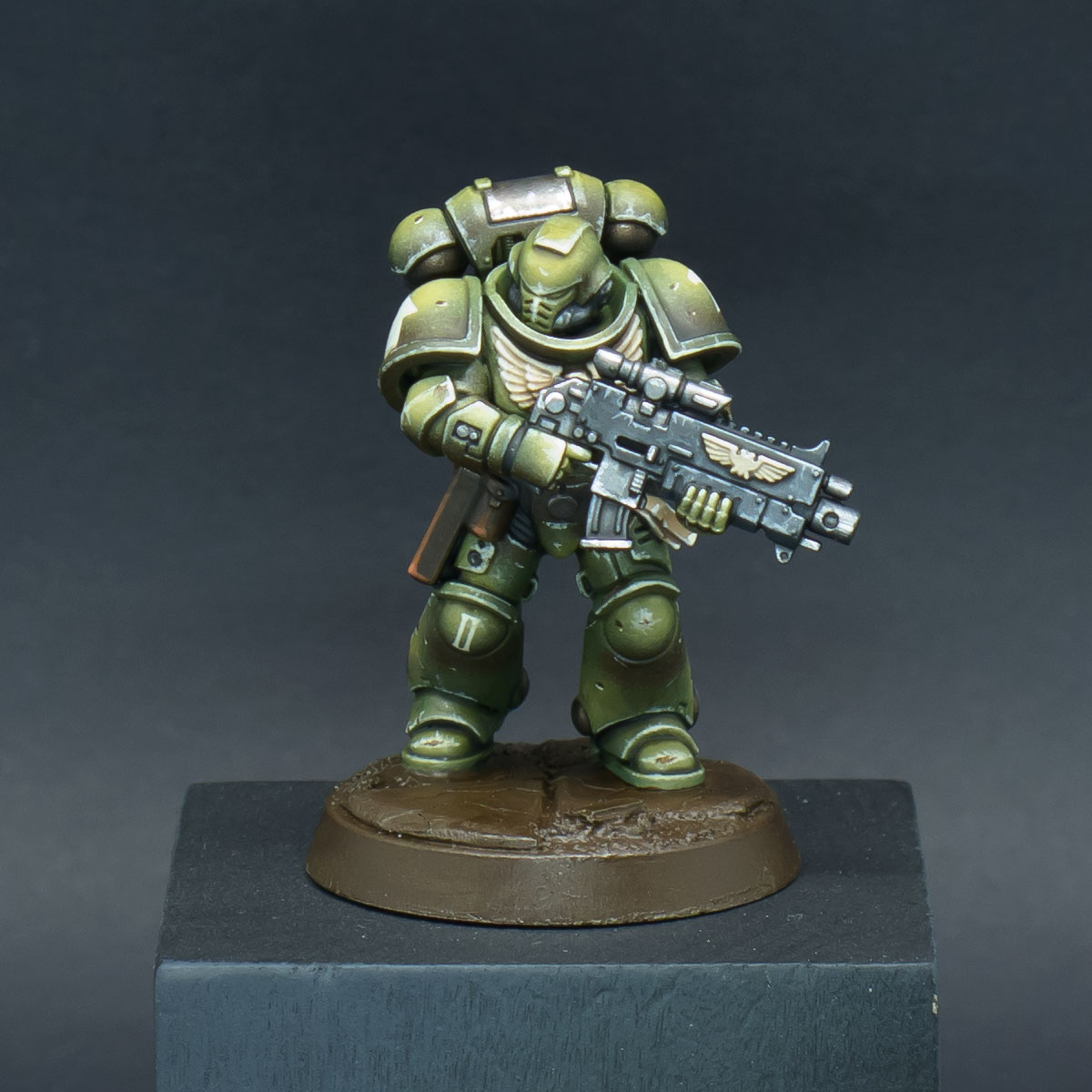 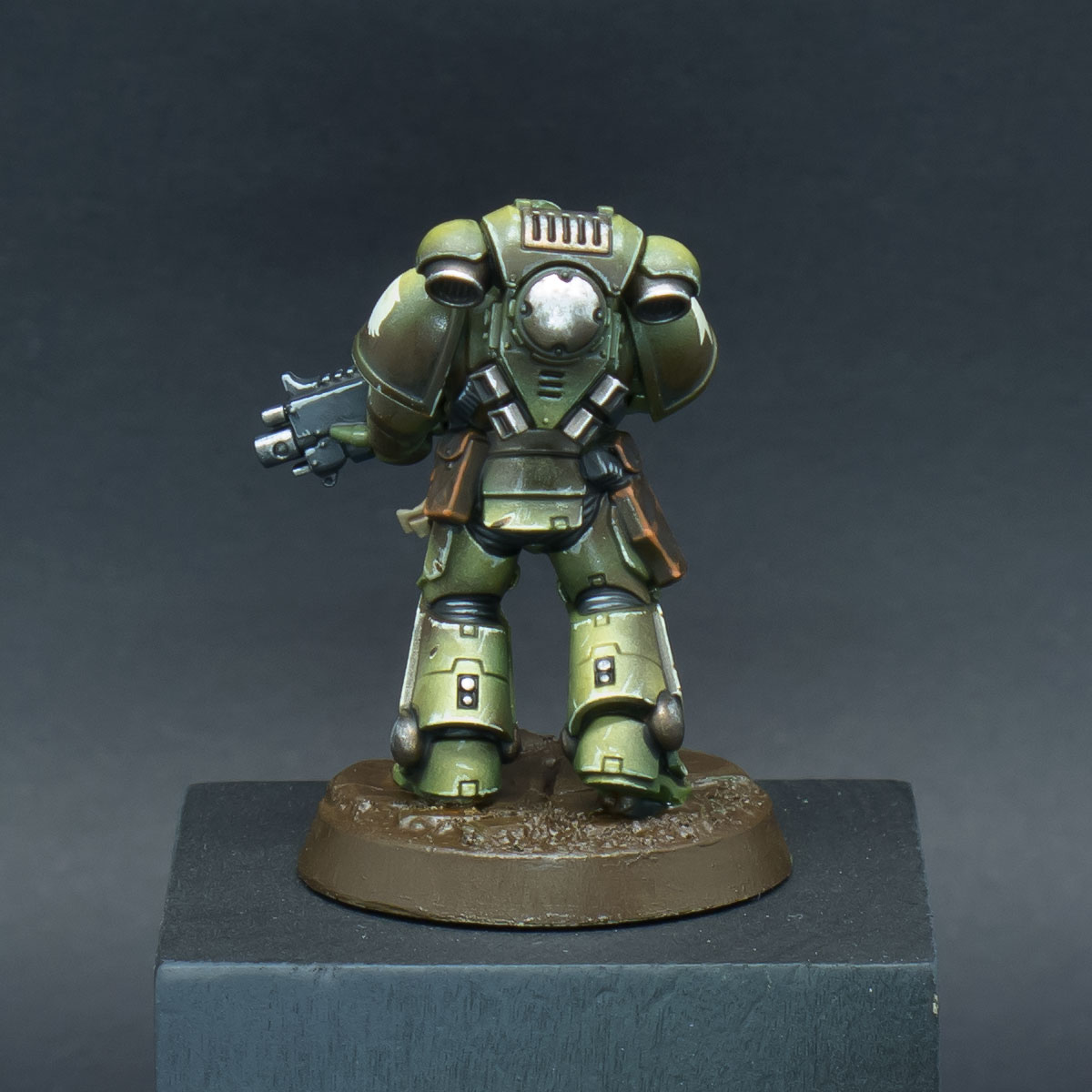 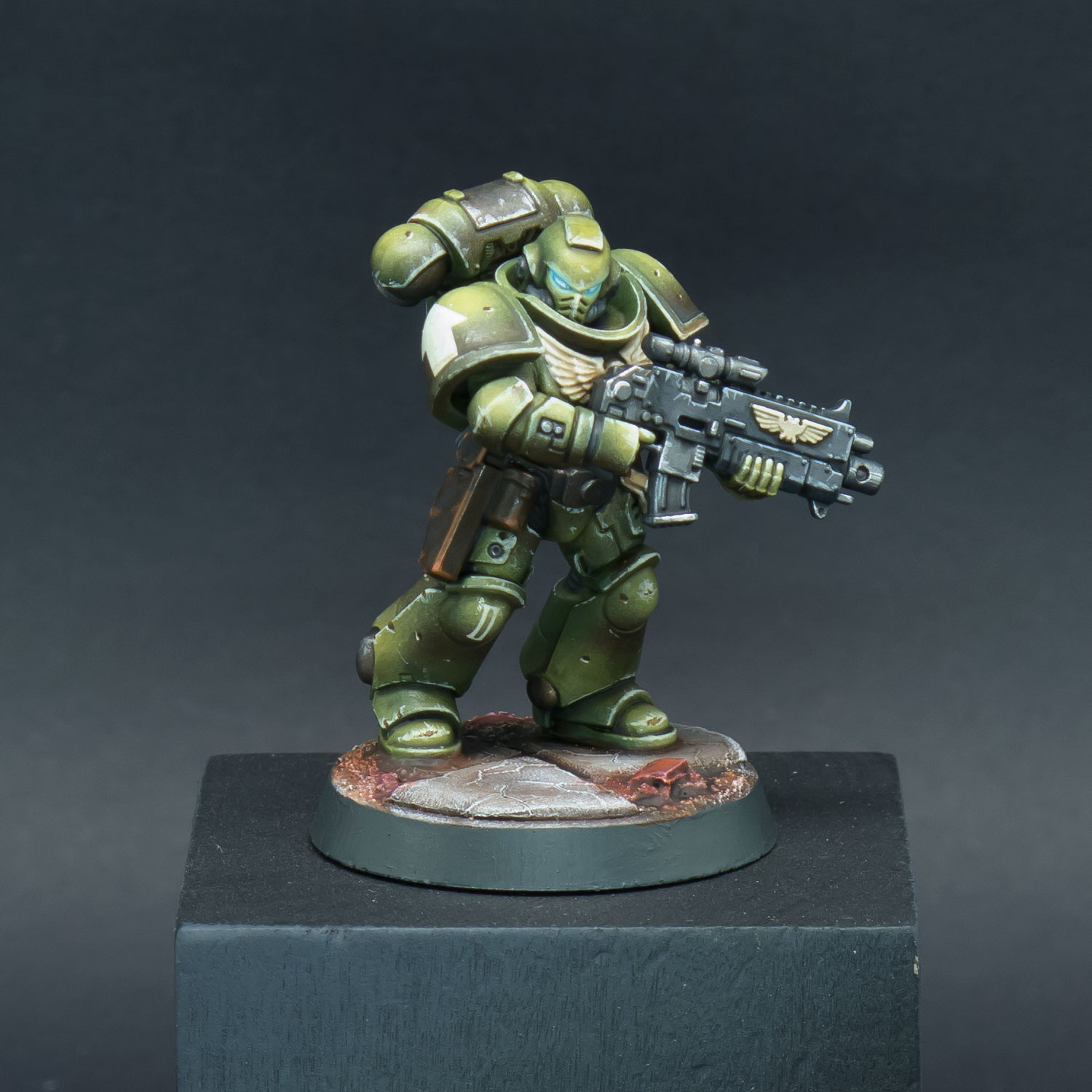 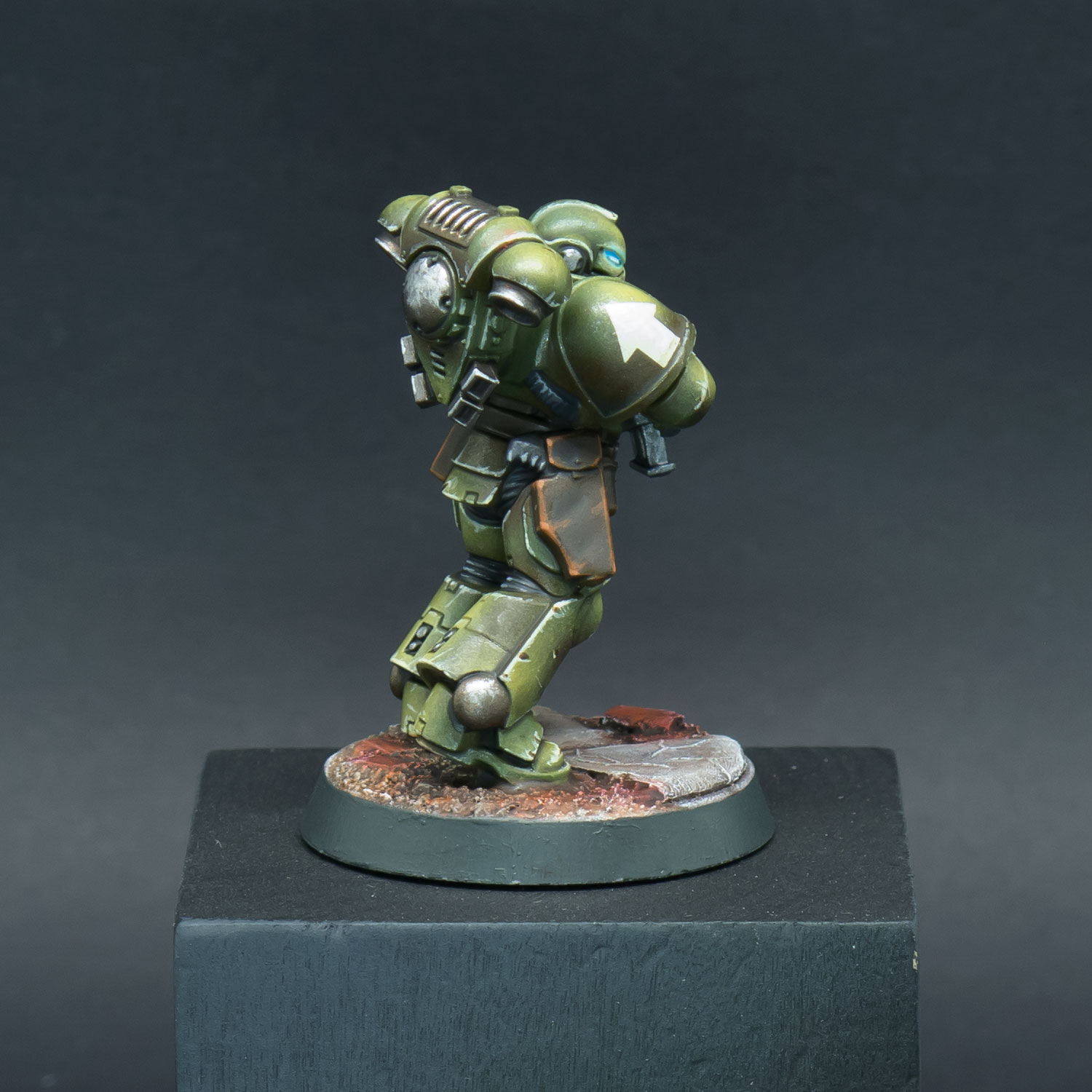 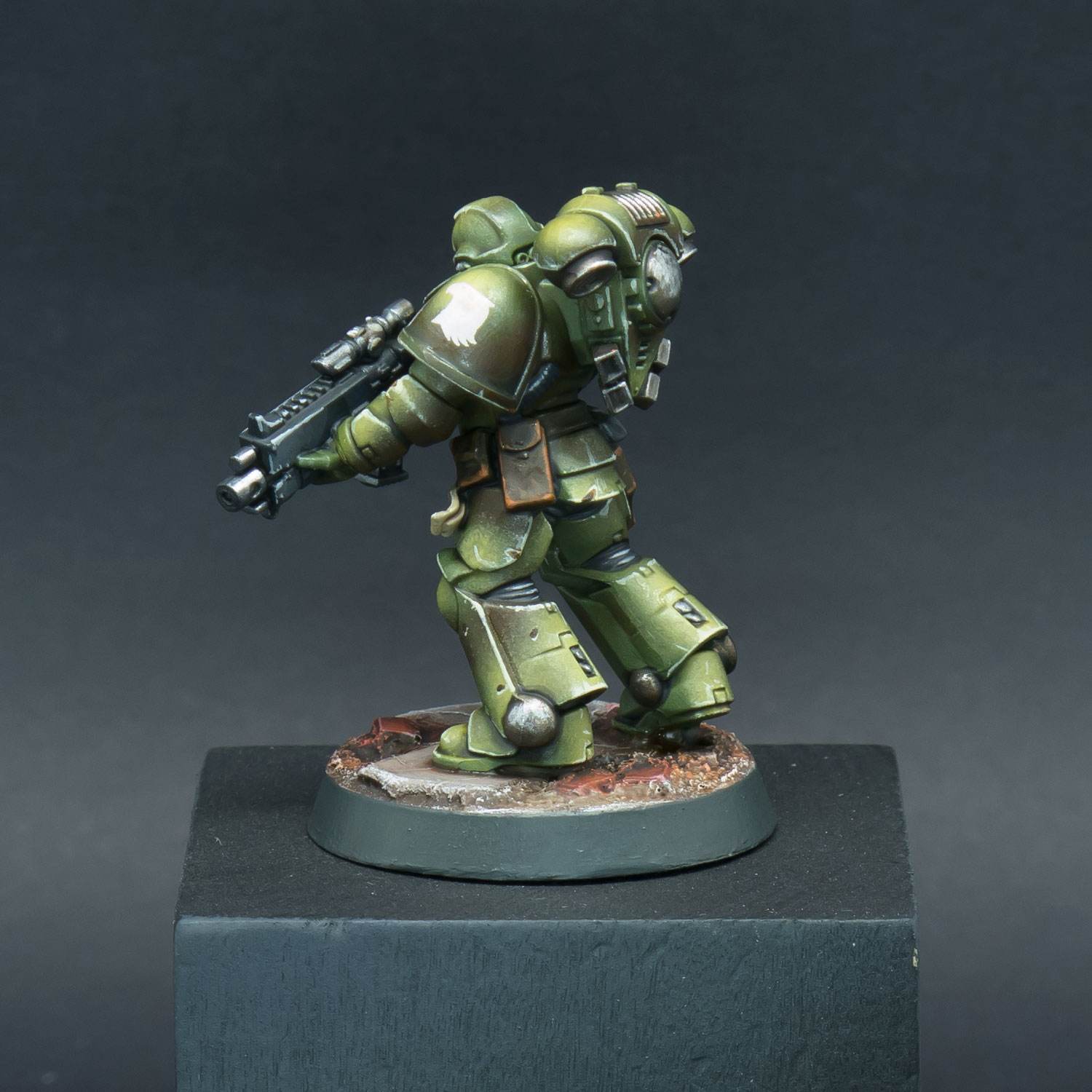 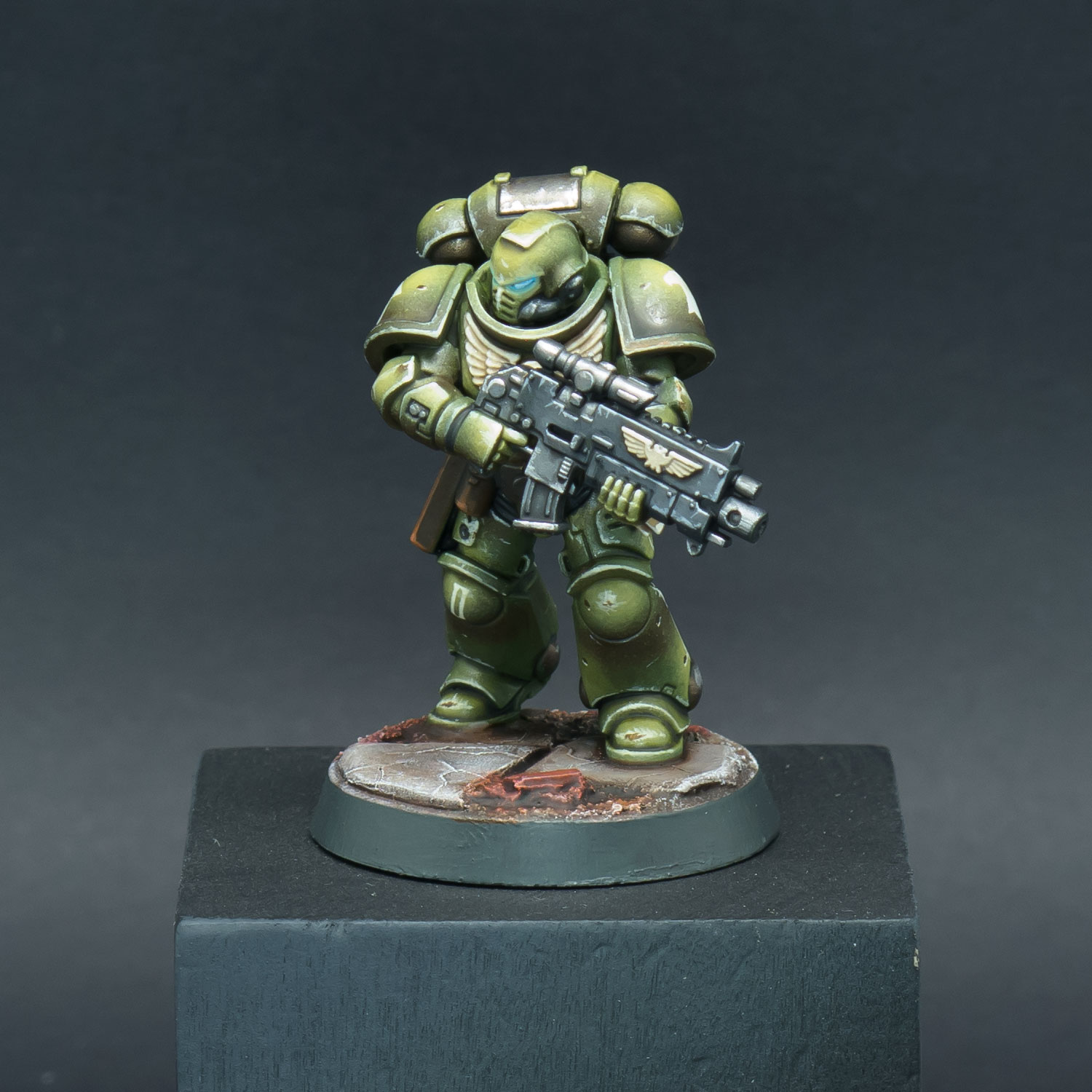 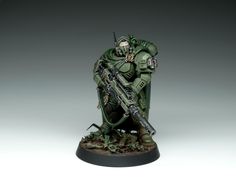 The cruel terror troops known as Raptors consider themselves the elite of the Chaos Space Marines warbands. Their murder squads epitomise what has become of the Assault Marines of the Traitor Legions.

Chaos Space Marine Raptors miniatures come in a range of dynamic poses. They are sculpted perched or taking off from the battlefield debris on their bases. All over the models, their metal-rimmed armour shows all the distorting effects of the Warp: grills emerge from shoulder pads; cables jut from armour; teeth protrude from various surfaces around the rim of the jump packs. They carry bolt pistols and cruel chainswords.

Only logged in customers who have purchased this product may leave a review.