Combining both the appearances of Super Saiyan 4 and Super Saiyan Blue, Super Saiyan Blue 4 gives the user a godly blue aura and engulfs their skin in bright blue fur. The user's hair slightly grows just like an SSJ4 and the form also creates a red outline around the user's eyes.

Using the same power difference between SSJ4 and SSJ3, we are going to measure SSJB4 and SSJB3 in terms of power. With that being said, SSJ4 is 10x stronger than the Super Saiyan 3 form supposedly, and Super Saiyan Blue 3 is 200,000,000x base power. So if we times that by 10, we will get the result for SSJB4.

The multiplier for Super Saiyan Blue 4 is a whopping 2,000,000,000x base power! This truly is the supreme Super Saiyan form. Imagine if Kaio-Ken was used alongside it, too overpowered!

(Variable B will represent base power level (#B = # times B))

Obviously mixing both Super Saiyan 4 and Super Saiyan Blue is impossible, and thankfully it is. If this form exists, I don't believe there would be any drawbacks for this form aside from ki consumption, so this form is ultimately a Trump Card in terms of power.

Goku and Vegeta would be able to take down anyone with this form and Kaio-Ken would only help the form out if it didn't kill the user immediately.

Saiyan Vin's input: I calculated super saiyan 4's multiplier to be closer to a 3,200x multiplier, which could have been rounded to a x10 multiplier, (Following the pattern from SSJ to SSJ3, all 3 definitely established power multipliers, there IS a pattern to these), and this form is very powerful, but not unstoppable, an intelegently made attack could potentially overpower it by taking advantage of it's power drain, which would be incredibly immense, as increasing the super saiyan forms together would duplicate the over drain of higher super saiyan forms, it is reasonable to think a repeated paralysis would be able to drain the energy.

This is a hard one, SSJ4 Gogeta should win due to his versatility when it comes to his power set.

For me its ssjg for what iv read no one can compare with them Bills squashed Goku ssj3,Gotenks Ssj,and Ultimate Gohan at 1%of his powers!without even trying I don't think there's any power who can beat a god without being god himself,no matter the power and power doesn't really mater for me,he can sense a godly ki no one can sense it unless you are a god,and finally he can consume ki!so for me ssjg

gogeta only takes 2 to create

I'm saying I have no way to compare power levels, so I will go with the power lending one over the fusion one since power lending seems to be classically used in a lot of one sided dbz fights.

Syn Shenron was > SS4 Goku but let's call them even.

Five minutes can span several weeks of episodes, just look at the Frieza fights lol =P Back on topic, most people cite this:

@xlab3000: ?? TDLP and I are calling Omega a Universe buster and you want scans from James? lol

@xlab3000: np ^.^ lol I do it all the time, it was just kinda funny for some reason XD, anyways, I posted the most commonly cited scan for "universe buster" Immediately afterwards the Supreme Kai and the Elder Kai say how even the realm of the Kais would be destroyed. I personally have some issues with it, but that's the scan.

@dratini1331: oh. I remeber someone saying that he destroyed a galaxy in a flashback in the anime. that was the reason I ask to see him destroying a galaxy

The DBZ Battle of Gods really was a let down. It was not the universe busting event at all it was meant to be.

ssjg goku from BoG is somewhere around or above syn shenron. so, although he would solo most GT characters, ssj4 gogeta would blink him away.

Five minutes can span several weeks of episodes, just look at the Frieza fights lol =P Back on topic, most people cite this:

Oh man. That scan does not mean he is universe busting. It means no one in the universe can stop him.

The Kaio-Shin did a simulation that the entire universe (including their realm) would be destroyed if Goku didn't stop him.

Even if we're counting individual galaxies, that would take millions of years to do even with Instant Transmission.

The Kaio-Shin did a simulation that the entire universe (including their realm) would be destroyed if Goku didn't stop him.

Even if we're counting individual galaxies, that would take millions of years to do even with Instant Transmission.

As far as I recall Buu and broly was also a universal threat. Are they universe busters now?

Plus isn't the dbz universe made up of only 4 galaxies.

I could be wrong though. My knowledge only comes from the tv show, not the manga's or the handbooks.

Can someone explain this though? Is this really the DB universe or just the northern galaxy?

In my opinion ssg wins. In the movie bills moved across the dbu in a matter of seconds (75% sure) and one shotted all z fighters at around 1% power

@kalkorratessg3: Gogeta can do all of that, at least x10 times better than Bills...

SSJ4 Gogeta tears Goku in half...

When did this ssjg come into existence? I watched DBZ all the time as a kid, dont remember him

@cgoodness: Because Battle of the Gods only came out this year, where have you been?

Gogeta is at least thrice as strong as omega if not even stronger.

Ssj god goku may be comparable in power if he got the time lapse power boost between z and gt.

Otherwise I think he does have a disadvantage

That picture is of the twelfth universe.

There is literally no way to powerscale the two. We don't know the full extent of Gogeta's power. We also don't know how much more powerful bills is compared to the z fighters.

(since gt was weak)

Featwise, GT is incredibly inconsistent, but still has a few very high end feats. Personally I picture Bills stomping Shenron, so SSG vs Gogeta can go either way.

No. Birus stated that against SSG Goku, he was using 70% of his power. The first part of their fight, Goku says he was only using about 80% of his own strength until Birus pushed him to go all out. Birus also stated that Goku was the 2nd strongest person he's ever fought. The strongest being Whis.

The entire event was basically just Birus' excuse to train Goku and have a little fun himself.

Ginyu did that too. Not as much as Goku and Bills, but that's not a high tier feat. 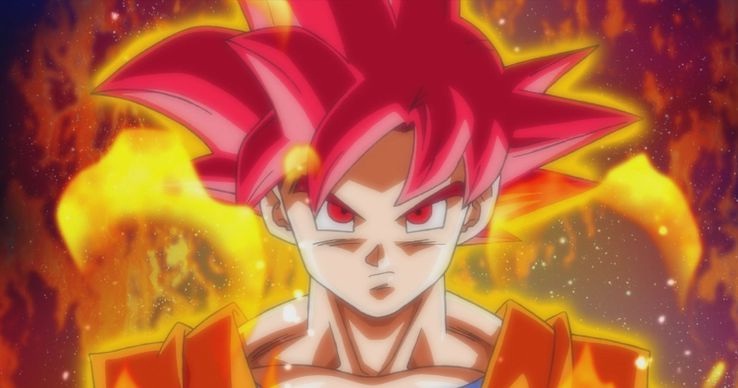 What Makes Super Saiyan 4 Separate From Other Transformations

KEEP READING: Dragon Ball Proves You're Never Too Old for an Adventure

The Boruto Anime Kills Off Its Most Powerful Hero

Earned my MFA from Fairleigh Dickinson University. Written for The Mary Sue, ScreenRant, The Anime Feminist, The Gamer, and Vocal. Lifelong lover of comics, anime, and weird films. Loves different varieties of coffee.

Felt some kind of excitement, even fidgeted in my chair. In the room, the husband noticed: You are starting to enjoy success, without fish and a nightingale ass. Also go to the dance, take off the chick, let him jerk off.

If you also point out that bras and panties are almost always not supposed under clothes, here is a complete image of our beloved wives. This time we immediately agreed to. Play such a game, Max and I settled together, separately from Tatyana and Marina, and pretend that we do not know each other. The wives, in turn, portray two ladies who escaped to the resort from their annoying husbands and are ready to break.

Water again, and then she was caught and, coughing and gasping, she clung to Rob's neck. Sorry, I was sure I caught you by the tail. Rob sat next to her on his knees on the spread of the blanket and rubbed her shoulders with his towel. Or was it Alan's towel.