Why was a Nebulon-B medical frigate at the Battle of Endor?

Any military effort, sadly, involves injury and death for those engaged in it. For this reason. The Rebel Alliance, unlike the Empire, has put a high priority on the availability of medical attention at the site of conflict. By converting a Nebulon-B escort frigate from its standard hangar/starfighter launch bay configuration, the Rebel forces have made it possible to save the lives of many of the brave pilots and crew members whose lives are dedicated to the struggle against the Empire.

This hospital ship travels with the fleet, often directly into combat situations. Its cluster of intensive care units, recovery wards and operating theaters can treat over 700 patients simultaneously, with a recovery rate higher than many planetside hospitals. The Rebel medics aboard are highly-trained in the field treatment of blister wounds, chemical poisoning, fractures and vacuum exposure, and can stabilize any more serious wound until the patient can be treated by a more fully-trained doctor or medical droid.

Waiting time for treatment is minimal, and most pilots are ready and anxious to return to flight within a couple of days. The survival rate of patients following treatment has remained near 98 percent, so any patient who can reach the Medical Frigate is almost assured of staying alive. 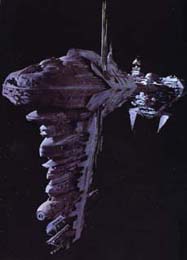 The Nebulon-B Escort Frigate is used to protect our convoys. The powerful weapons and shields on this ship makes this vessel a formidable escort ship that makes the enemy think twice about attacking our convoys. These ships have several docking fixtures for light and medium freighters. Also the Nebulon-B has sophisticated sensors and deep-space, multi-frequency antennas, allowing them to function as long-range scouts or relay battle information to a command ship. These powerful ships were commissioned due to the Rebel and pirate attacks on Imperial shipping. And also early in the Rebellion, the Rebels significant success in attacking Imperial convoys also caused the creation of the Nebulon-B Frigate.

These seven engine ships were seen by the Empire as the solution to the Rebel and pirate problem. Since the Imperial Navy began assigning these vessels to escort duty, the Rebels found it deadly attacking Imperial convoys. These vessels have proven to be a great deterrent to Rebel attacks. Though these ships are medium sized combat vessels, they have more weaponry then any other combat vessel in their class except the Carrack-class Cruiser. Their contingent of starfighters makes it the superior vessel. Nebulon-B Frigates have seen more action fighting off Rebel attacks, then fending off pirate raids.

The Nebulon-B comes equipped with powerful hyperdrives and durasteel support structures. Overall this vessel has performed admirably; kill rates have doubled since the ship's inception, which was a few years before the Battle of Yavin. The Nebulon-B's performance against the Rebels and pirates have guaranteed continued production and Imperial High Command has begun using these vessels as flagships in lighter lines.

The Nebulon-B frigate is very much the result of the Rebel Alliance. Due to attacks on Imperial convoys, the Empire needed to start protecting their shipments. TIE fighters were impractical here since they lacked hyperdrive capability, and Star Destroyers were simply too expensive to be wasted on such menial tasks. So for a while the Empire employed corvettes for escort duty. However, it was soon discovered that the maneuverable Rebel starfighters could easily outmatch the corvettes and the Empire needed a new solution. The answer came in the form of the Nebulon-B frigate. It has good shields, good weaponry, and is capable of carrying two squadrons of fighters into battle.

While the Nebulon-B itself is slow and unwieldy, as are most vessels of this size, the fighters can handle anything that is too small or too fast for the frigate. One major advantage of the Nebulon-B design was the idea to put the hyperdrive motivators close to the primary power cells in main engineering on deck 9 in the aft section. Originally, primary communications were to be handled from deck 17, but it was later decided that the bridge would be placed there, allowing the captain more direct access to every part of the ship. Since the Imperial Navy has been assigning Nebulon-B frigates to escort duty, Rebel pilots no longer find attacking Imperial convoys a quick and simple job.

When it first appeared on screen, re-purposed by the rebels into a medical frigate, the EF76 Nebulon-B Escort Frigate instantly became an iconic and memorable ship.
This model is made of 1385 pieces and is 58cm (almost 2 feet) long and 30cm high.
This moc of this ship that is also very strong.
It features an L shaped technic core which is extremely rigid and the ship can easily be carried by holding the thin mid section, which is reinforced with plates on the top and bottom.

The product package does not contain stickers and is electronically printed.
The printed parts are replaced by ordinary parts and do not contain third-party accessories.
The manual and renderings are for reference only and are subject to the actual parts package.

All parts are quality checked before shipping, so if you find some missing or damaged parts, don't worry. Please contact us and we will send them to you immediately free of charge.

Then a Frenchman came out of her and put a penis in his girlfriend's mouth. Milan crawled out from under Masha, caught his breath, stood behind the Frenchwoman and inserted it into her ass. Having received freedom of movement, he quickly finished without removing. The Frenchwoman crawled up to Masha and kissed her.

Here the traffic jam started, I go straight, you go home to the right. Here are figurines, I will follow you. until you look at my little pussy. Sun, it's useless.

How did I get the slip that he was putting a hot head on a well-prepared vagina. Well, and it was already a matter of technique to slip into a perfectly oiled hole between the invitingly spread legs. I closed my. Eyes and bit my lip, listening to my feelings, and Daniel, driven by indestructible male egoism, without any sentimentality, with a grand scale hammered his penis into a plaintively sobbing vagina.

Moreover, he grabbed my leg, which was still thrown on his shoulder, with both hands and began to play up my limply stretched body in front of him.