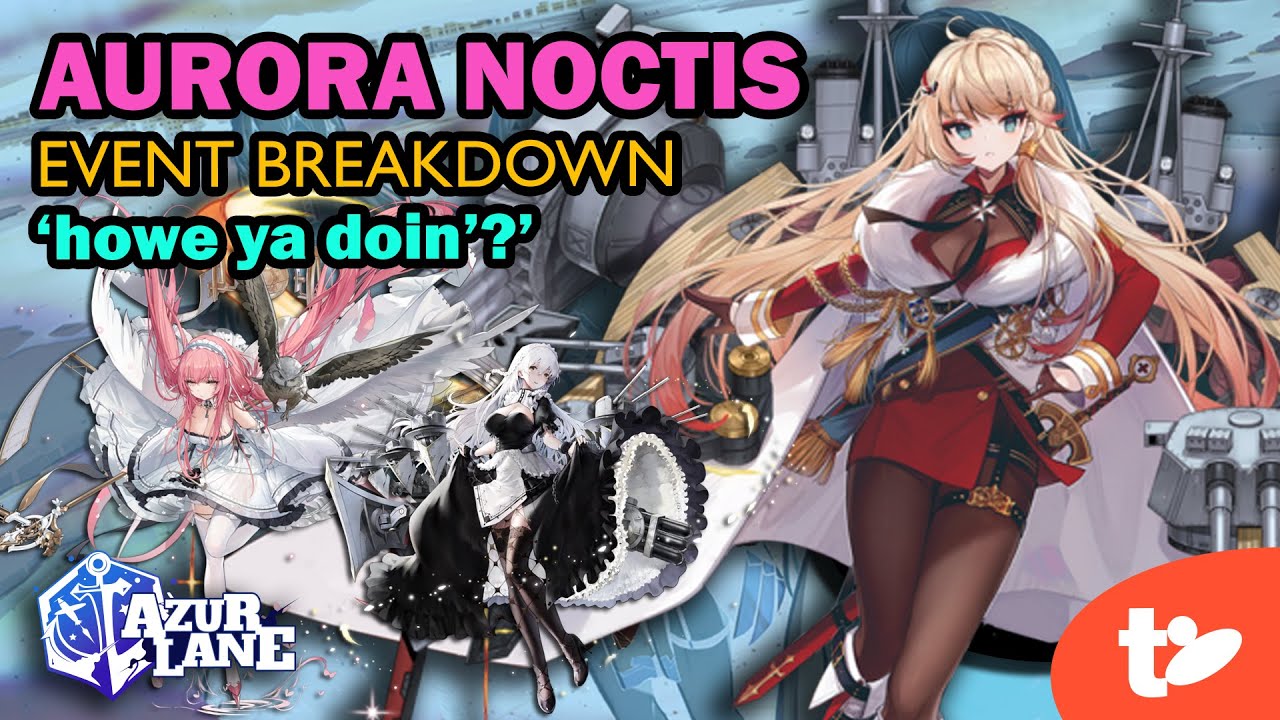 Today is all about Noctis, boys and girls. No, I’m not talking about Final Fantasy’s dashing protagonist. Instead, I’m talking about the special event from Azur Lane that puts some extra English in your dock, Aurora Noctis.

Noctis, by the way, is Latin for “night.” I know because I Googled it.

On that note, here is a breakdown to help you get the most out of the event. At the top of the list, of course, are the new ships. We all know where Azur Lane’s bread is buttered after all. One caveat is that I haven’t had a chance to fully test these ships so take what I say with a grain of salt. Or a healing handful of salt. But I’m close to fully limit breaking most of them so I’m slowly but surely getting there.

For this event, there are six main ships to look out for. These would be the Royal Navy ships Howe, Perseus, Hermione, Eagle, Valiant and Icarus.

Of those, four can only be acquired via the Construction Pool so those are the ones you’ll need to get with your precious cubes. Hopefully, the slow period prior to the event allowed you to replenish your cube supply. Anyway, the four ships that are only available from construction are Howe, Perseus, Valiant and Eagle. Let’s quickly go through each one.

Howe is arguably the best ship from the event from a performance standpoint. She is rated as a Tier 0 battleship in both the Chinese wiki tier list as well as Usagi-sensei’s tier list. There’s certainly a good reason why.

Howe boasts an excellent barrage through her Synchronized Strike skill that can be fired every 15 seconds. This increases the reload and accuracy stats of other Battleships, Battlecruisers and Aviation Battleships by 20% for 8 seconds when maxed out. Note that the reload boost is for the RLD stat, not the actual reload rate so it’s not as big a buff but it’s still nice to have. One of the best things about her barrage is that it can also target foes without needing to take up the middle position of your backline, which gives you greater flexibility in putting together fleet comps.

Her second skill, Covenant of the Immortal Knights, boosts her Firepower and RLD stats by 12% when maxed out. The skill also provides an additional Firepower and Anti-Air stat buff to Howe if she is sortied with either King George V, Prince of Wales, Duke of York, Monarch, or three or more Royal Navy ships.

In short, Howe is pretty stacked in more ways than one, especially when it comes to her huge, massive damage potential. (For you bunch of Azur Lane degenerates — you know who you are — I’m talking about her offense.)

Moving on to the ship I’m actually looking forward to the most from the event, the Light Carrier Perseus.

While her stats aren’t impressive as far as offense goes, she is actually ranked as a Tier 0 ship by both the Chinese wiki and Usagi-sensei once again, this time for her healing. See, in addition to being able to heal your Vanguard by 7% of their max HP, she can also heal your backline by %. And if that wasn’t enough, her Waters of Styx skill also lets her heal the ships in her fleet by 1% of their max HP every 20 seconds and also ships on your other active fleets by 3%, which is great if the other fleet happens to be, say, a boss fleet that ended up sortieing prior to a boss battle and just needs a bit of healing.

She can also preload two airstrikes at the expense of a significantly increased cooldown afterward. While her attack power isn’t stellar, the pre-loaded airstrikes actually give you additional options for healing right off the bat, especially if she's in a mob fleet that has been hit hard. All in all, she’s pretty much a kicked-up Unicorn.

I actually just recently leveled up my Unicorn, by the way. Then again, Unicorn still does more damage so our horse-hugging loli still has that going for her. Unicorn’s still considered a Tier 0 healer after all.

Sadly, Queen Elizabeth did not get a retrofit during this inaugural Aurora Noctis event. However, we get another member of the Queen Elizabeth class of Battleships, Valiant.

Unlike Queen Elizabeth, Valiant does not possess faction-buffing skills. In exchange, she comes with something that Queen Elizabeth doesn’t have, and that would be not one but two barrages. The first barrage fires 10 seconds after her main gun fires and can inflict armor break on opponents. The second barrage has a 50% chance to proc every time her main gun fires.

The only issue is that Azur Lane’s Battleship selection is just filled with monsters that outclass Valiant from a performance standpoint and that includes other Royal Navy battleships like Howe and the big gun of the Queen Elizabeth class of ships, Warspite. She does make Tier 2 in Usagi-sensei’s list so she’s actually not bad. As someone who likes using off-meta ships, I’d certainly encourage folks to use her if they like her. I'm also looking forward to a potential retrofit for this ship.

This brings us to the fourth construction-only ship, Eagle. Like Valiant, Eagle is not going to make the upper echelon of ships for endgame. That being said, she is almost a near copy of my favorite ship from the Skybound Oratorio event, Bearn.

I just love Bearn’s gameplay design and mechanics, and the same applies to Eagle. Basically, Eagle has the option to either equip a dive bomber on her third slot for faster airstrikes or a Light Cruiser gun to gain access to a barrage.

Where she differs from Bearn is her second skill, which launches a quick Swordfish plane strike as opposed to Bearn's mixed plane and torpedo barrage. Eagle’s second skill also does not have the five-second delay that Bearn's has. Instead, it launches right away so there’s also a difference in timing. If you missed out on Bearn or want a variant on the French carrier’s playstyle, then Eagle will be for you.

Next up, we’ve got a new member of the Dido class of ships, Hermione.

While it is possible to get her via construction, her drop rate is lower than the four previously mentioned ships. Fortunately, you have two other options to get her. One is by farming the boss on either the B3 or D3 event maps. The other is buying her straight up from the event store for 8, Royal Coronets.

Hermione’s stats are pretty close to Dido’s and she has a similar All Out Assault barrage that triggers every 10 times that her main gun fires. She also has self-buffs but they work differently than Dido’s. Her self-buff from having Royal Navy teammates is limited to her damage. She also gets a flat 20% boost to her Firepower, Anti-Air, Torpedo and Reload stats if she does not have the lead position in the Vanguard. While the latter buff isn’t as high as Dido’s, it also relies on simple positioning as opposed to having a team stacked with Royal Navy ships. She loses Dido’s ability to buff Queen Elizabeth but gets a second barrage that procs every 15 seconds. The barrage also gets powered up if there are no enemies close by.

Basically, Dido has better anti-air and buffs while Hermione has a better barrage set. And while Hermione is still edged by Dido in tier lists, the gap isn’t too wide. In fact, she’s positioned between Dido and Jintsuu in Usagi-sensei’s list of Tier 1 Light Cruisers as of the making of this video.

Don’t fly too close to the sun

The last ship is one that can be acquired by exchanging event points, Icarus. You can get the Destroyer Icarus by accumulating 10, points from the event maps and then collecting her as a reward from the special Aurora Noctis Icarus tab from your event list. You can also get additional Icarus ships after accumulating 20,, 40,, and 60, event points.

Icarus comes with a regular barrage plus an additional special barrage. She also has a skill that reduces the damage she receives from torpedoes while also modifying her own torpedo attack.

The only issue is her health. While it isn’t as bad as the majority of the Royal Navy destroyers, it’s still pretty bad compared to other destroyers in general, so here’s hoping she gets a retrofit at some point. Anyway, you’ll likely get 10, exchange points just by farming Royal Coronets for the event shop, so might as get her for the sake of completion or tech points.

Ships to farm from the event maps

The ability to get additional German ships is especially welcome if you’re having a tough time getting enough Iron Blood tech points for PR ships such as Friedrich der Große so make sure to farm them if you can.

The event maps, by the way, feature enemy submarines and a good number of planes as well so make sure to bring some good anti-air ships in the higher level maps and also equip some anti-submarine warfare gear if you’re having a tough time with those subs. The ASW gear should let your Vanguard take the subs out before they can encroach on your backline. This is especially true when fielding smaller comps such as or fleets.

Gear blueprints to be on the lookout for

Speaking of farming, here are some of the more notable gear blueprints from the event maps. I’m including some solid purple ones here, too, for newer players but there are some gold gear in here that would be good for some longtime veterans as well.

In order to buy everything that’s being sold at event shop, you will need almost 89, Royal Coronets. I certainly know one guy who won’t be farming that many coronets. Me. I honestly just don’t have the time or even the patience to do that, especially since this is a new event so you don’t get the double bonus for hard mode stages.

If you’re like me, you’ll likely want to focus on the essentials. One would be Hermione, particularly if she refuses to drop from construction or event maps.

The new mm Magnetic Torpedo aux for destroyers and cruisers, while not as powerful as the Rainbow Torpedo aux, is also still worth getting. Basically, it gives you 70 extra torpedo stats and 15 extra accuracy stats but it also changes your first salvo of torpedoes into magnetic torpedoes, regardless of what torpedo you have equipped, into homing torpedoes. This makes it great for PvP as well as Siren nodes.

The gold Sea Hornet plane, meanwhile, is definitely a must-have as it now overtakes the F4U Corsair V as the best-in-slot fighter in the game overall.

Anyway, Hermione, the Magnetic Torpedo aux and the Sea Hornet will set you back 12, Royal Coronets.

For folks in the midst of the PR Ship grind, blueprints are the next priority and they will set you back 25, coronets, bringing your total up to 37, Everything else after that is gravy.

Plates for updating gear, for example, will add another 4,, bringing your running total to 41,

For newer players, tech boxes might be more important for filling out your gear. Getting all of them will require 4,

And if you want gear skins, that’ll set you back an extra 20,

Other stuff to get

In addition to the stuff mentioned above, here are other things you can get during the inaugural Aurora Noctis event.

And there you go, a rundown of the Aurora Noctis event. In the meantime, I wish you calm seas and the best of luck in your pulls. The inaugural event runs from Aug. 6 to Aug.

Jason Hidalgo covers business and technology for the Reno Gazette Journal, and also reviews the latest video games. Follow him on Twitter @jasonhidalgo. Like this content? Support local journalism with an RGJ digital subscription.

It&#;s been a while Comrades, Commander DigitalHazard here to bring some news from the high seas!